Daily Mail
Share on FacebookShare Share on TwitterTweet
MARTIN SAMUEL AT MOLINEUX: For the first 45 minutes we saw why Manchester City could be title contenders; for the next 45 we discovered why any challenge may just fizzle out again.
Wolves 1-3 Manchester City: Kevin De Bruyne, Phil Foden and Gabriel Jesus strike as Pep Guardiola's side kick off their Premier League campaign with a hard-earned three points

By Martin Samuel for the Daily Mail

Here was a marker laid down. A result, and performance, that showed why Manchester City could be champions this season.

And yet, those 33 minutes. The passage, and it was not a short one, when Wolves could have scored, what, four, maybe five? When City looked all at sea at the back. When they missed Aymeric Laporte and we saw how vulnerable they remain to just one key injury, or opponents with energy and creative verve.

The scoreline flatters City really. Not for their first-half performance - a two-goal winning margin does not do that justice - but their second. Even the best sides wobble, that is true. Yet City, having excelled for 45 minutes, could have trailed within 15 of the second-half restart. Frailty remains, no matter the investment of the summer. 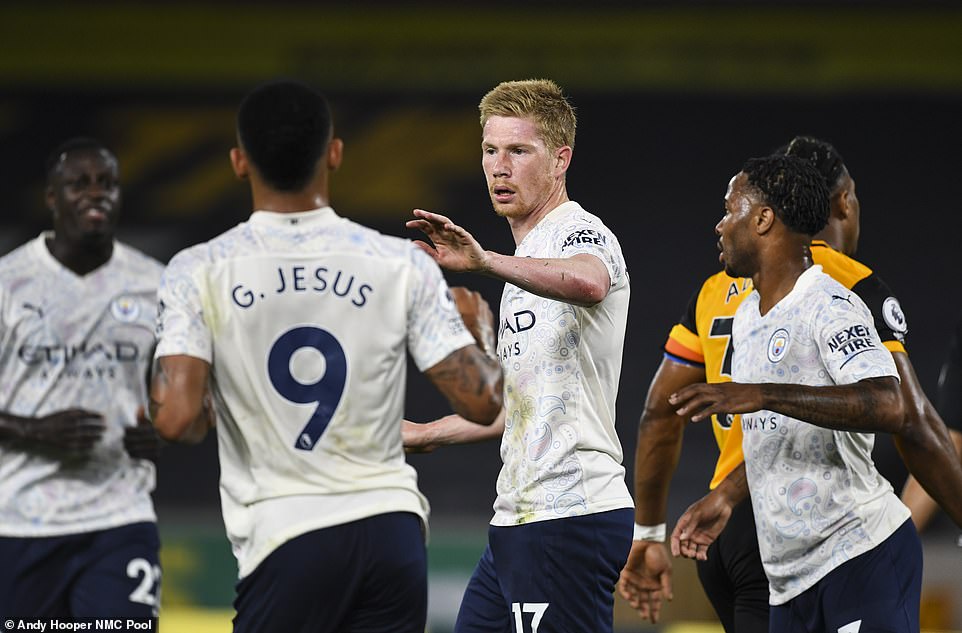 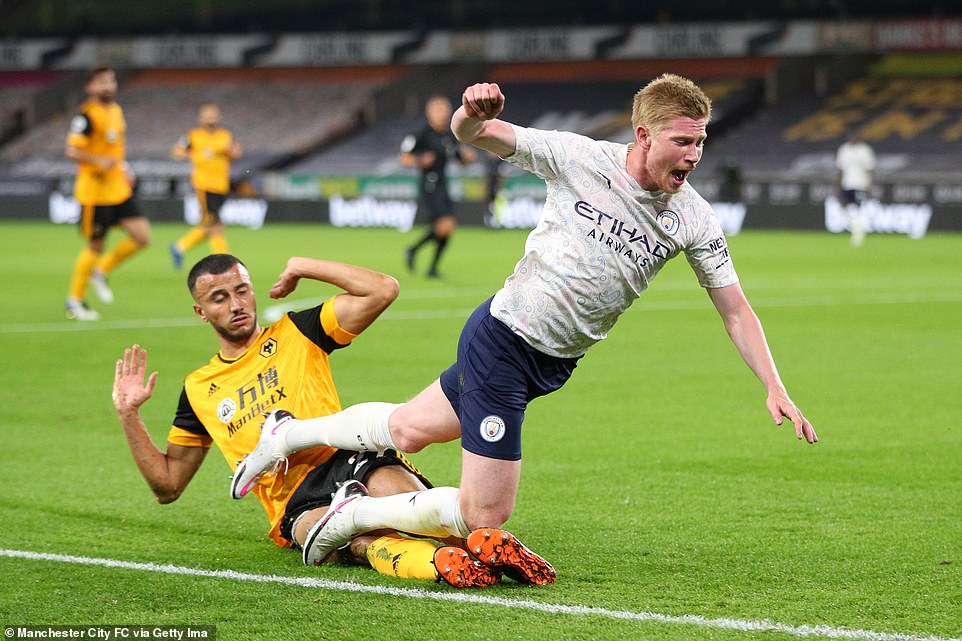 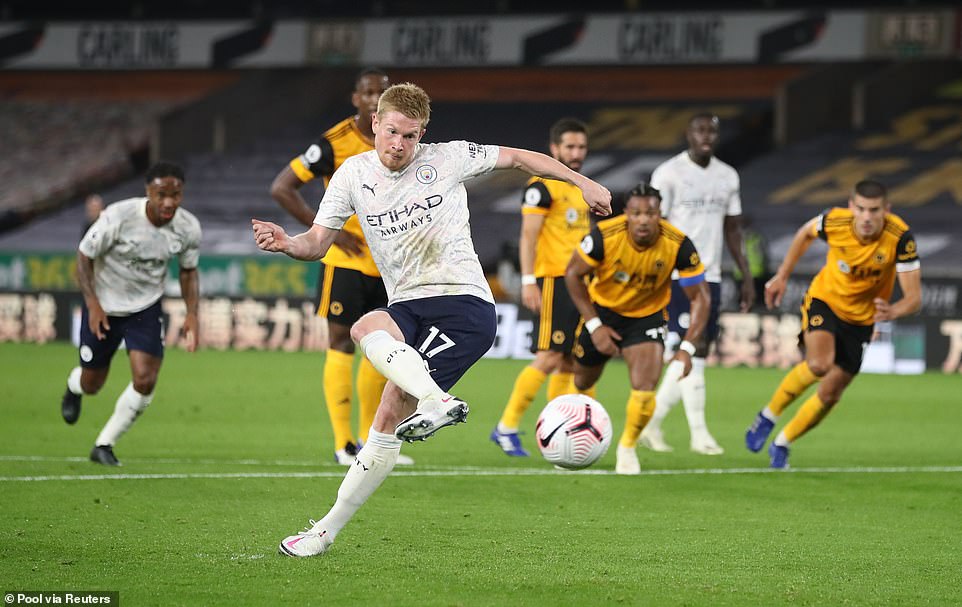 Season at a glance
Advertisement

True, City were not at full strength at the back and Laporte's replacement, John Stones, no longer inspires confidence against the best opposition. Yet Liverpool had a defensive crisis at Chelsea and solved it with the battlefield promotion of midfielder Fabinho, who looked more convincing than many of Manchester City's defenders appeared here.

It was a good goal that brought Wolves back into the game after 78 minutes, just 2-1 down, but questions could be asked of both Benjamin Mendy and Stones. Manchester City are still without their Virgil van Dijk, and until he is found their best-laid plans can always be undone.

The fact that Manchester City have now equalled a record dating back to the 19th century says much about their standing in English football across the last decade. It was Aston Villa who set the benchmark for season starts, winning their first game in 10 campaigns straight between 1891 and 1900. City matched that achievement on Monday night.

And the odds were not entirely with them, either. Wolves have been something of a bogey team of late, doing the double over City last season, and there was the matter of injuries and absences - seven out including Laporte and the mighty Sergio Aguero.

To begin with, it made not a jot of difference. City were outstanding in the first half, a different class really. By the time Wolves forged a chance of note, City were two goals up and seemingly comfortable. Not coasting, because City rarely coast - but wholly in charge. Their football was quite beautiful at times, quick, incisive passing exchanges, restless movement, the intelligence of Kevin De Bruyne setting the tempo. 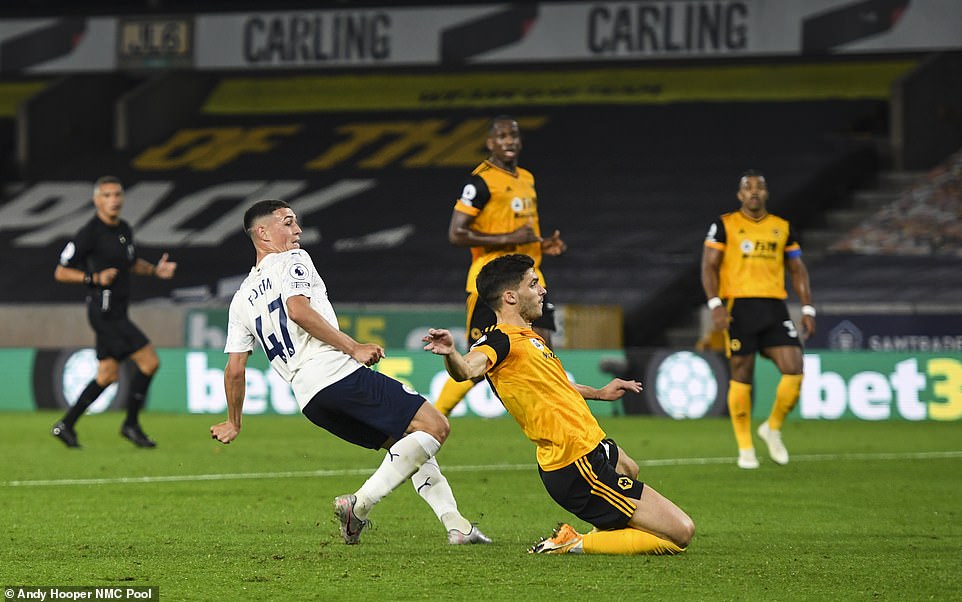 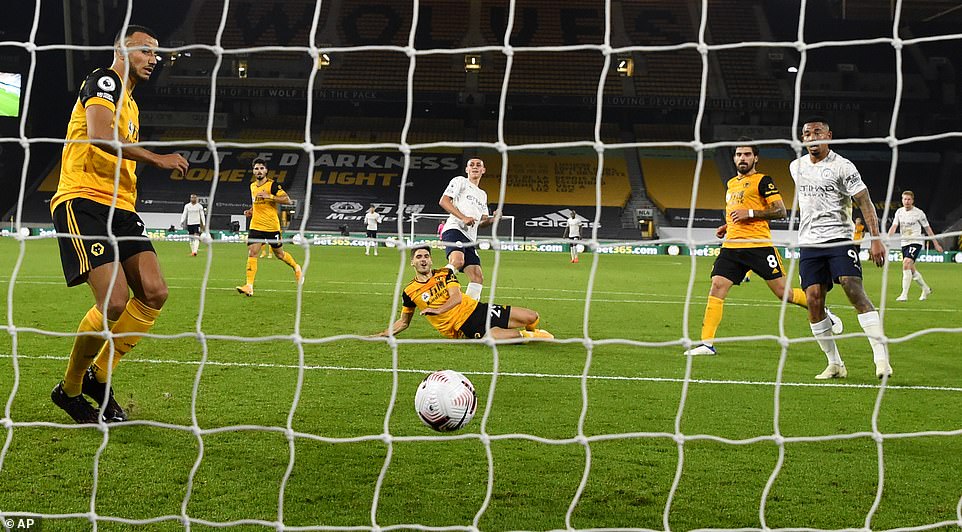 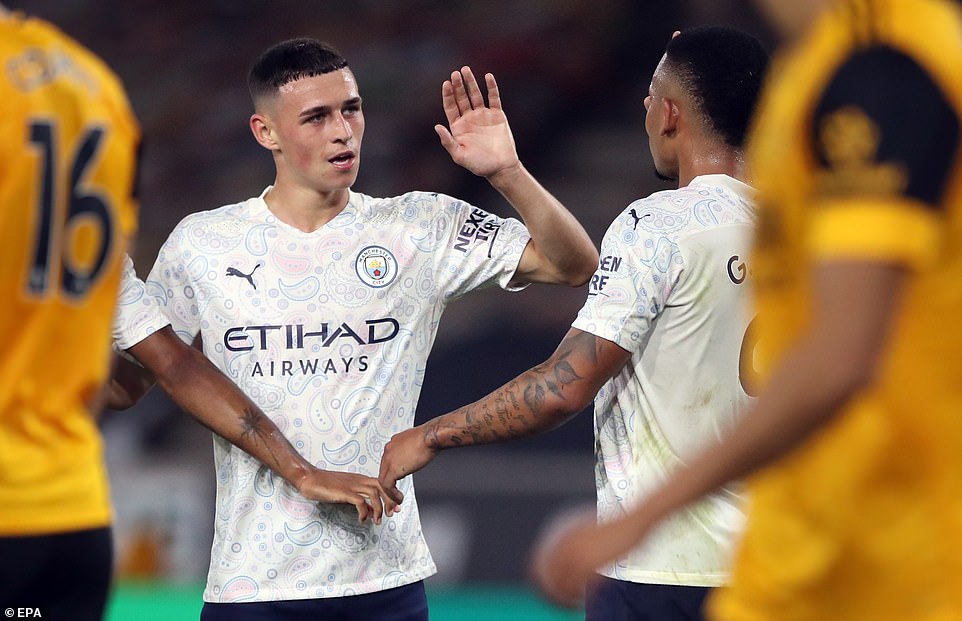 It seems madness to think of Phil Foden as an upgrade on the departed David Silva, but he is younger and poses even more of a goal threat. Pep Guardiola has waited patiently - as has Foden - but there is no question he is now unleashing a player perfectly suited to the elite Premier League environment. Foden has started 33 games for Manchester City now and in that time recorded 12 goals and 10 assists.

From the second minute, Wolves were on the back foot. That was when Raheem Sterling turned Willy Boly exquisitely, then took a very clumsy touch and crumpled beneath the presence of Conor Coady. Not a tackle, because Coady was smart enough not to commit, but merely placing himself in Sterling's vicinity was enough for the City man to fall. Coady reacted furiously, fearing the worst, but referee Andre Marriner was wise to it. He waved play on and decided to give Sterling the benefit of the doubt, too. It looked a dive. Marriner charitably chose to view Sterling's collapse as more of an unfortunate coincidence. He is a lucky fellow.

Sadly, the same cannot be said for Wolves new signing Marcal, who lasted just eight minutes before picking up a knock that forced the immediate introduction of Ruben Vinagre. It was a like for like replacement and too early in the game to assess Marcal's influence, but it was not as if City needed assistance. Minutes later, a De Bruyne free-kick from 25 yards out forced the first save from Wolves goalkeeper Rui Patricio.

The goal was coming, though, Wolves were creaking, and in the 19th minute the breakthrough arrived. De Bruyne had been stretching the defence to its limit all night but one run tempted Romain Saiss into a thoughtless lunge. This time there was no complexity. Marriner pointed to the spot and De Bruyne stepped up, now established as City's problem-solving penalty taker. No mistake this time, either. Perfectly positioned to the right, he gave Patricio no chance, even guessing correctly.

Now City turned the screw. There was a quite fabulous move after 30 minutes involving Gabriel Jesus, Foden and Sterling before Patricio saved, and a minute later similar intricate patterns conjured a second. This time the running order was Foden to Jesus, to De Bruyne, feeding Sterling on the left and cut back to Foden for a whip-smart finish. 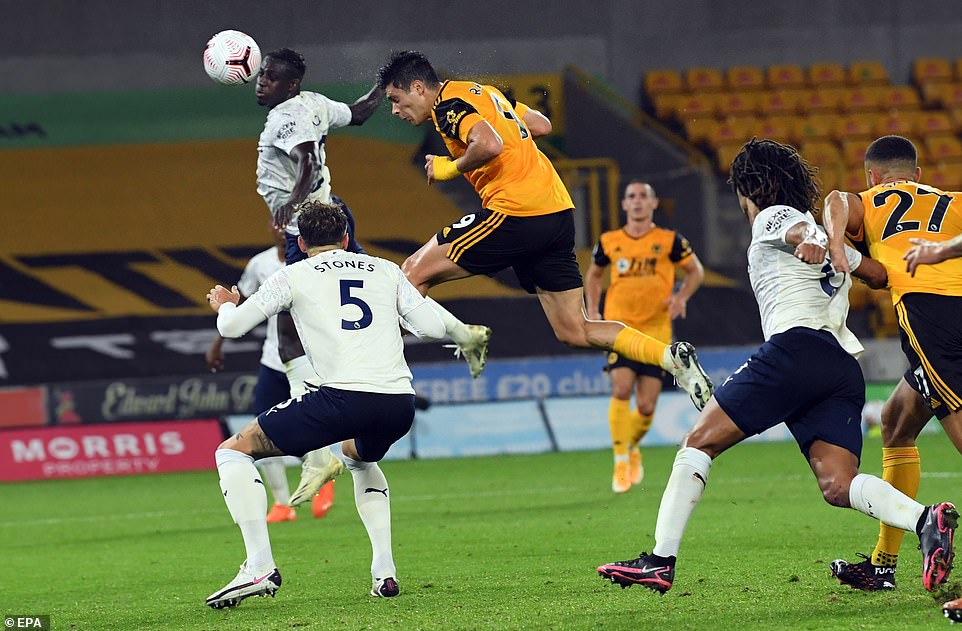 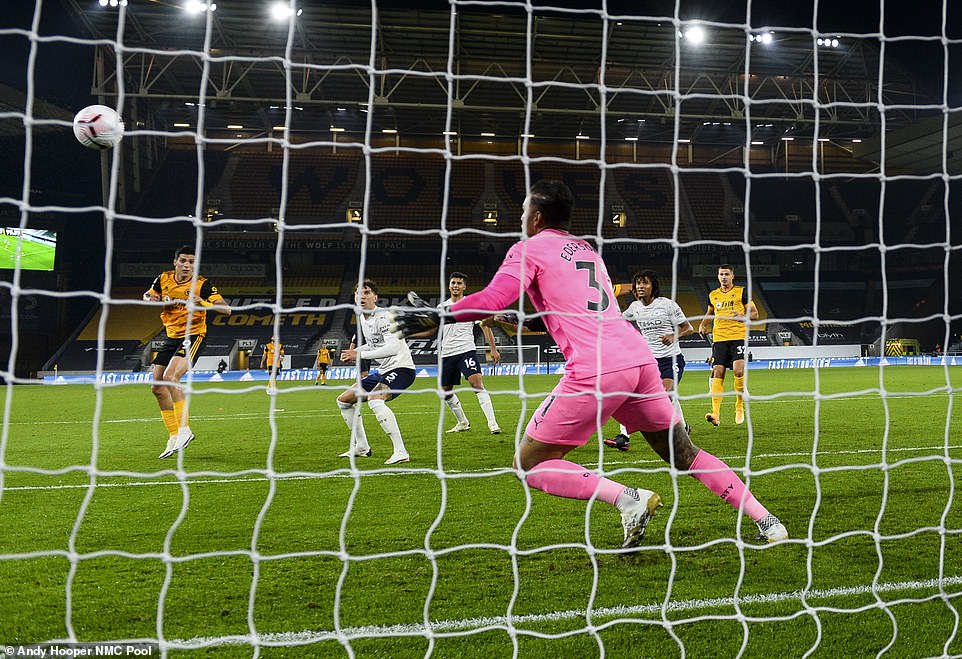 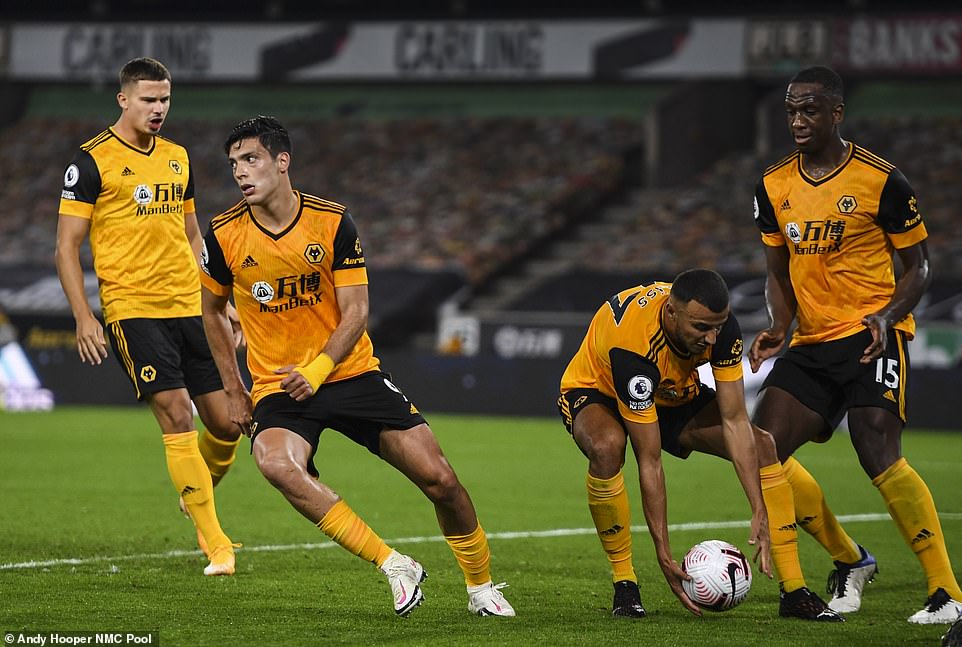 At which point, the only question was how many, but Wolves are a tidy side and City prone to lapses. At the end of the half Wolves served notice with a Raul Jimenez header and after half-time it was a different game. Scare after scare troubled City, and with better finishing Wolves could have led.

First, Adama Traore picked out Daniel Podence, whose shot on the turn from 12 yards travelled just wide. Soon after a Ruben Neves shot - which could have been struck harder - was cleared off the line by Kyle Walker, before Podence broke through again, outpacing Stones but this time finishing with a lame attempted chip. Bringing to an end a brief spell that could have seen Wolves score four, Traore cut one back to Jimenez who screwed his shot wide from the perfect position.

Wolves finally got what they deserved after 78 minutes, although their goal raised continued questions about City's resistance. Podence even nutmegged De Bruyne on the way to threading the ball through to Jimenez, converting his header from eight yards. Yet could Mendy have cut out the cross, could Stones have put in a challenge? And why are we still asking these questions, when Guardiola has had many months to address these weaknesses? It is not enough to blame the absence of one man. It cannot just be that if Laporte is out, City are vulnerable. Not when they are capable of taking the game to such heights as an attacking force.

Ultimately, Wolves ran out of steam searching for the second and City gave the scoreline a degree of emphasis four minutes into injury time. De Bruyne chased hard to win the ball back from Boly, before feeding Jesus whose shot clipped Coady on its way to goal, leaving Patricio wrong-footed. So the best team won, and at a ground where a great many will leave with nothing this season. It was a result of champions. Yet it didn't feel that way. It felt, in many ways, that City are carrying on just where they laid off. Brilliant, but… 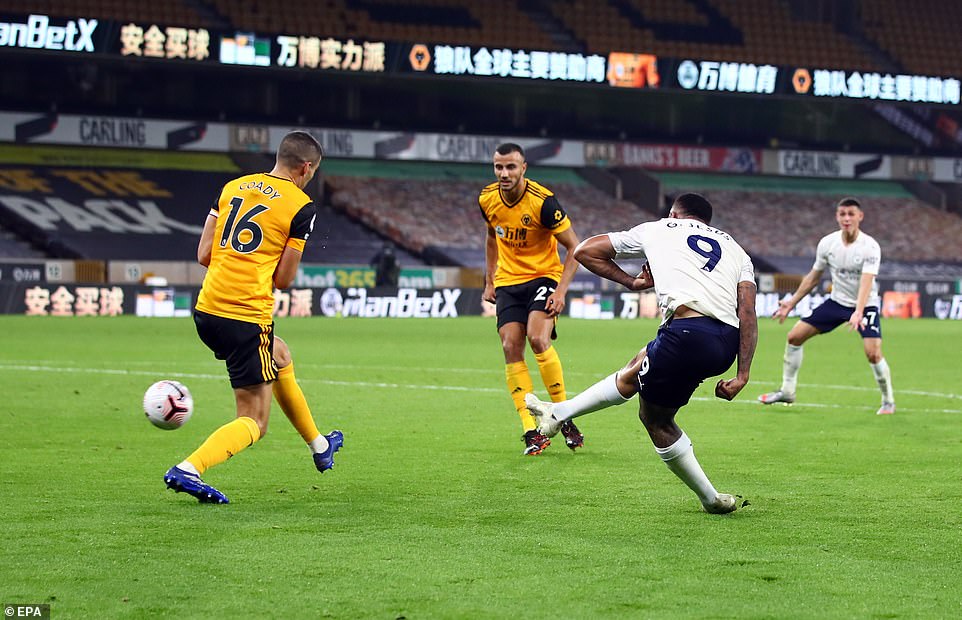 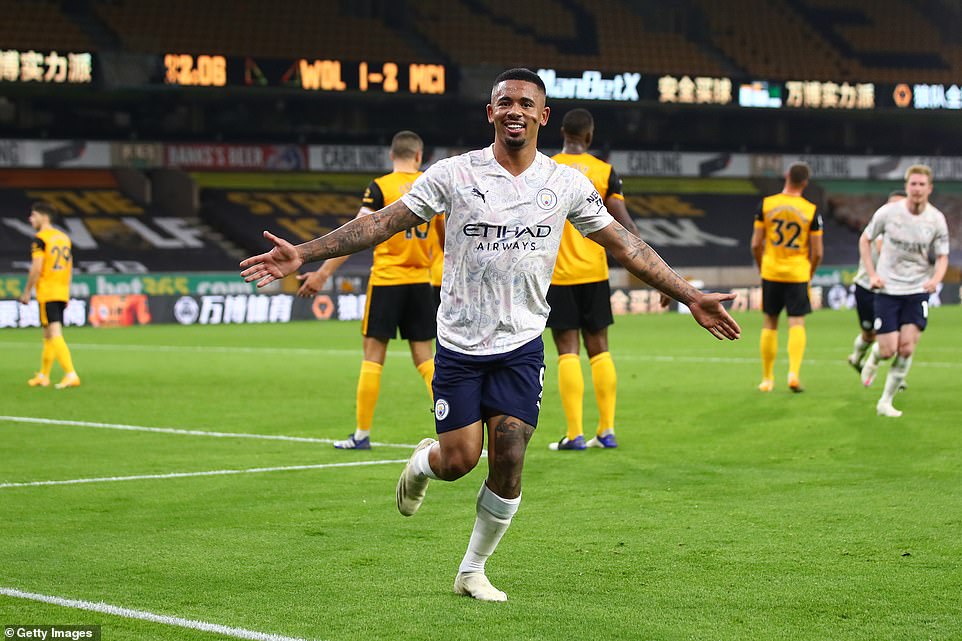 Scroll down to read Sportsmail's live runner from the game.