Here's why gas prices are sinking

CNN
Share on FacebookShare Share on TwitterTweet
Prices at the pump continue to sink, providing relief to inflation-weary consumers and an economy mired in a slowdown.
The national average for regular gasoline dropped three cents to $4.16 a gallon on Wednesday, according to AAA. That marks the 50th consecutive day of falling prices.
Gas prices have tumbled by 86 cents since hitting a record average high of $5.02 on June 14. Over the past month alone the national average is down by 65 cents.
Nineteen states have average gas prices below $4, including Ohio, Iowa and Wisconsin, according to AAA.
The steady decline in gas prices has been driven by multiple factors, including recession fears that have knocked down oil prices and the fact that some Americans cut back on driving when gas prices spiked above $5 a gallon. 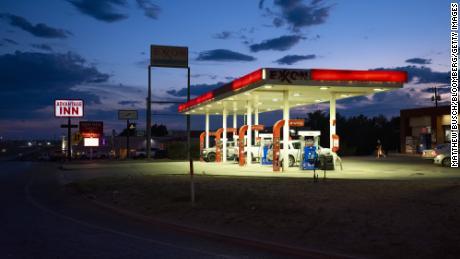 "When people pay and they see $100 for the bill, they panic and become apoplectic," said Tom Kloza, global head of energy analysis at the Oil Price Information Service.
Kloza also credited the unprecedented release of emergency oil by the Biden administration from the Strategic Petroleum Reserve, though he conceded it's difficult to quantify the impact.
No matter the cause, falling prices at the pump give a boost to consumers grappling with high prices on food, rent and everyday items.
Although the average price nationally is $4.16 a gallon, Kloza noted figure is lifted by high prices in places like California. The median price, on the other hand, is $3.99, according to OPIS.
Some analysts argue prices will continue to dip, especially as the summer driving season winds down.
"This streak has more room to run," said Kloza.
Andy Lipow, president of consulting firm Lipow Oil Associates, expects the national average will drop to $4.10 a gallon in the next seven to 10 days and $4 by Labor Day.
Oil tumbles
Meanwhile, oil prices fell sharply on Wednesday, finishing at levels unseen since Russia invaded Ukraine.
The losses were sparked by a new government report that revealed an unexpected build in stockpiles of crude and gasoline inventories, raising questions about energy demand.
US crude tumbled 4% to $90.66 a barrel -- the lowest close since February 10, two weeks before Russia launched its war in Ukraine. Brent crude, the world benchmark, lost more than 3%.
Concerns about a global economic slowdown have driven oil prices lower in recent days and weeks. Since closing at $123.70 a barrel on March 8, US oil is down by about 27%.
Oil prices turned lower on Wednesday after the US Energy Information Administration said weekly oil inventories jumped by 4.5 million barrels last week, compared with expectations for a decline. Gasoline stockpiles also increased slightly.
The oil market initially rallied on Wednesday after OPEC+ announced an agreement to just slightly increase production beginning in September. That amounts to the smallest output increase on a percentage basis in OPEC history, according to Rapidan Energy Group.
Similar shots
This week's most popular shots
Topics of the week
Tottenham vs Leicester City Brentford vs Arsenal Premier League table Atlético Madrid vs Real Madrid Lyon vs PSG Real Madrid ASUU strike update Everton vs West Ham Italy vs England Milan vs Napoli
Hot topics