Fayose: A pillar the PDP must discard, by Adeolu Fabunmi -

The Eagle Online
Share on FacebookShare Share on TwitterTweet
In contemporary time, there have been repeated scenarios of politicians from the two major political parties: Peoples Democratic Party and All Progressives Congress, engaging in anti-party activities against the collective interests of their respective pa 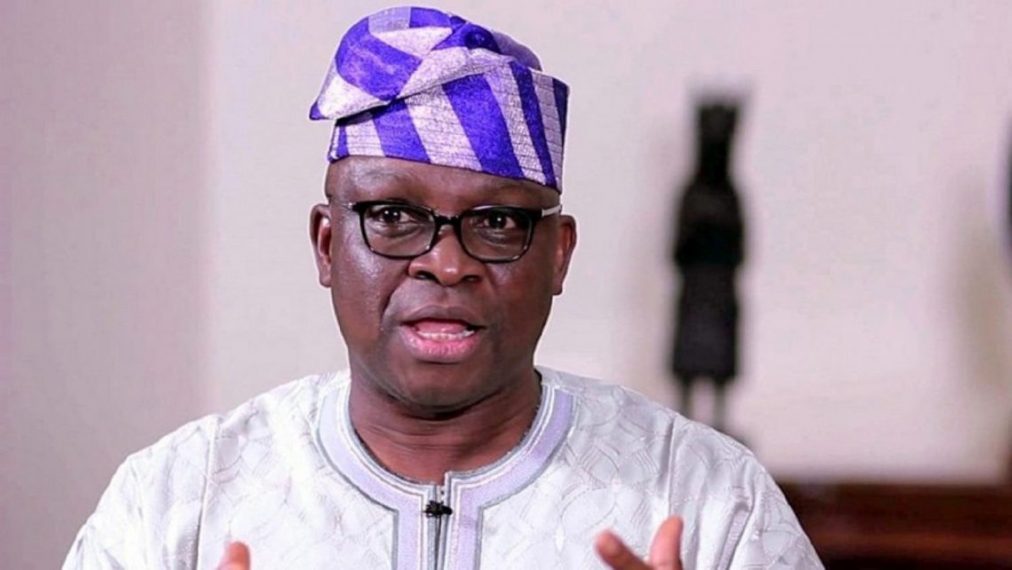 One thing that has been a consistent feature in the politics of South West geopolitical zone of the country is the history of political betrayals. Right from the days of the legendary crisis between Chief Obafemi Awolowo and Chief S. L. A. Akintola, and down to the Second Republic when certain elements of the defunct Unity Party of Nigeria were insinuated to having forbidden and subterranean engagements with individuals from opposing political camps, the way politics is played in the South West has remained very much the same in the way that politicians compromise the interests of their political parties in order to advance their selfish and sometimes parochial interests.

In contemporary time, there have been repeated scenarios of politicians from the two major political parties: Peoples Democratic Party and All Progressives Congress, engaging in anti-party activities against the collective interests of their respective parties and that situation that is currently in the scheme is that of the immediate former governor of Ekiti State, Ayodele Fayose, who has persistently stood against restoring normalcy to the avalanche of crises bedeviling the PDP in the South West states.

Before Fayose came to the political spotlight in 2003 when he emerged as the governor of Ekiti State on the platform of the PDP, very little, if at all anything, was known about him. His first term in office as governor was very controversial more or less owing to how he disrespected all political and traditional entities in the state, which ultimately led to his impeachment and consequent inability to secure a second term ticket on the platform of the PDP.

Fast forward to the present time, Fayose is back at what he does best, which is being an enemy of progress and an antagonist of reconciliation. For a former governor of his calibre, it would have been expected that he would be in the vanguard of finding a solution to the lingering crisis rocking the PDP in his Ekiti State, not to think that he would be a party to the problem.

Every now and then, what you get to hear is that Fayose is engaging in a supremacy battle with Senator Biodun Olujimi. It is such a shame that a two-time governor of a state would be so discredited as not being in full charge of happenings in his own political party in the same state, much less fighting for a space with a senator.

One wonders what else Fayose expects the PDP to concede to him after winning election on the platform of the party for two terms and even giving him the privilege of singlehandedly produce his deputy as the governorship candidate of the party. This is in addition to giving him a free hand to superintend over the affairs of the PDP, not only in Ekiti State, but in the entire South West region when he was the sole PDP governor in the region.

But the question that begs for an answer is how did Fayose fare when the PDP gave him all these privileges? Of course, he was a wholesale failure! Rather than use his position to build the PDP in the South West, the only celebrated political manoeuvring of Fayose was building alliances with the then Governor of Osun State, Rauf Aregbesola, of the APC hue and, by extension, becoming an ally of the National Leader of the APC, Asiwaju Bola Ahmed Tinubu!

For the four years between 2014 to 2018 that Fayose was the sole PDP governor in Yorubaland, there was not a single gain that the PDP got from him. Rather, he was an agent of destabilisation in the party and it beats anyone’s imagination how the same character would, today, beat his chest that he must either have his way or nothing.

If Fayose had had a genuine interest in the promotion of the PDP in the South West, the altruistic thing for him to do was to work in cordial terms with Governor Seyi Makinde of Oyo State and be a leading partner in the restoration of the party in Yorubaland. But unfortunately, that is not where Fayose’s interest lies. Going by his antecedents, the former Ekiti governor is not an individual who does anything for posterity and altruism. Fayose is driven by toxic ego and his proclivity for profanity lacks borders.

As far as he is concerned, the whole of the PDP may go into the gutters if that is what it would take to buy himself political protection in the ongoing investigation of this administration by the Economic and Financial Crimes Commission.

The only plausible explanation for Foyose’s resentment to the peace move in Ekiti State’s PDP is to pigeonhole it in the class act of politicians of his shade who do the job of a kamikaze against their own political party.

If the PDP insists on carrying Fayose along at all cost in its current effort at reconciliation, one only hopes that it would not be too late before the party realises how wasteful such a venture would be. There is no guarantee that Fayose is interested in the promotion of the PDP in the South West, talk less of Ekiti State and, left between the options of either building the party or trading the party for his personal gain, the former Ekiti governor would gladly pick the latter.

. Fabunmi is a member of the PDP and writes from Ado-Ekiti, Ekiti State.