SC for Ed holds 'Stand Up and Step Out' event

Abccolumbia.com
Share on FacebookShare Share on TwitterTweet
SC for Ed holds 'Stand Up and Step Out' event 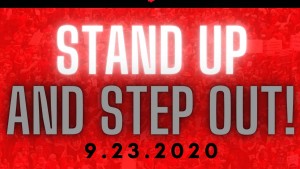 Columbia, S.C. (WOLO) — On Wednesday, educators across the state took a personal day to contact local legislators and ask for support in raising teacher pay.

The public education advocacy group, SC for Ed, staged the ‘Stand Up and Step Out’  walkout.

“The goal for us is to educate the community and to educate our legislature about what it is that teachers and all school staff does, and how important those roles are,” said Nicole Walker, Board Member of SC for Ed.

The South Carolina Senate passed the budget that would give teachers a pay raise and sent it to the House. But on Tuesday, the House sent it to the Ways and Means Committee, which means it is highly unlikely to be voted on during the House’s two-week special session. It will now be pushed to January.

“We really want to encourage people between now and January to think about the ways in which education impacts their daily lives, and why it’s so critically important to start to rebuild that funding. You know, we’re not going to become fully funded in a year, but we certainly need to put more good faith effort into it,” said Walker.

Teachers will not yet get the pay raise they’ve been fighting for.

“We’re not the only ones affected by this budget. State employees really deserve that hazard pay for the things that they are doing currently. So there are a lot of people out there that were affected by their refusal to pass it at this time,” said Walker.

SC for Ed sent out a survey to teachers across the state asking about how likely they are to remain in the profession. According to that survey, which garnered about 5,000 replies, hundreds are planning or considering leaving.

“27% of the respondents said that they definitely planned to leave their profession at the end of this year. There was about another 30% that was questioning whether or not they would stay or leave,” said Walker. “You’re looking at almost half. So if we lose another 2,000 teachers, 2,500 teachers in a time when we are in a severe teacher shortage, that’s going to have a huge impact.”

“I have the utmost respect for teachers and the challenges they face every day in the classroom. Like most of society, this pandemic has made their lives even more difficult. The teacher step increase is a state promise and I for one am committed to fulfilling that obligation. As budget writers, our number one priority is prudent management of the state’s finances. If we find our economy has remained stable when the General Assembly returns in January, I will prioritize fully funding the teacher step increases.”

ABC Columbia also reached out to the S.C. Department of Education for comment, that stated:

“We are very supportive of step increases being reinstated as outlined in the Senate version of H. 5201. Failure to pass the proposed $50 million increase to the EFA and reinstate the step could potentially lead to a greater teaching shortage than our state is already experiencing which would have implications well beyond the pandemic.”