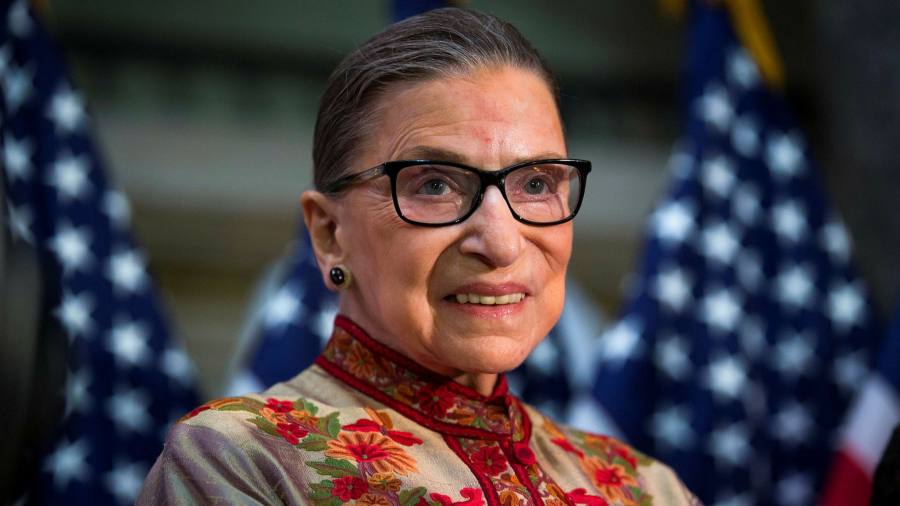 How apt that much of Ruth Bader Ginsburg’s most distinguished work was written in dissent. A Jewish woman from prewar Brooklyn, her rise to the US Supreme Court was itself a kind of “No” — to the hurdles of race, class and above all gender. In 27 years on the bench, she helped to lower all three.

With her death on Friday, the Supreme Court’s conservative majority has lost its most tenacious opponent. Liberals have lost a figure they cherished more than most Democratic presidents. And the US has lost what chance it ever had of a “normal” election. With six weeks left until voters choose a president, the question of when and how to fill Ginsburg’s place promises to crowd out most other subjects. “Fill that seat!” is the chant that greeted President Donald Trump at a campaign rally over the weekend. What it lacked in taste it made up for in clarity of intent. A fraught election has become yet more volatile.

Even Ginsburg’s enemies allow that the empty seat will daunt whoever fills it. In retrospect, what stands out about her career is not just the liberalism but the prescience. Seven years ago, Ginsburg dissented from Shelby County vs Holder, in which the court struck down provisions of the 1965 Voting Rights Act. Effectively, jurisdictions with a history of race discrimination no longer had to pre-clear changes in their voting laws with Washington. As reports of voter suppression increase, her opinion reads like an eerie warning.

In her pre-court life as a litigator, she helped to expand the equal protection clause of the constitution in a way that has become common sense today. Had she never been a judge, she would still be remembered as a lawyer of vast significance.

Mr Trump is not obliged to share her enthusiasm for these and other progressive causes. Senate Republicans are certainly not going to vote for a judge who champions them. Having blocked a Barack Obama nominee in 2016, ostensibly because an election was imminent, the party hopes to install one of their own before November.

Appealing to their sense of fair play and reciprocity seems exotic. But the likes of Senate majority leader Mitch McConnell should at least consider the perceived legitimacy of the Supreme Court. Entrenched conservative control is only worth so much if a large part of the country regards it as ill-gotten. Neither side benefits from a court that fails to command broad consent. A hasty, nakedly partisan nomination process would compromise the institution. This is why one swing senator, Republican Susan Collins, has already argued against a Senate vote before the election. Such a gesture would at least cancel out the chicanery of 2016, draining some of the resentment that it left behind. With a pandemic and a recession still in dire effect, it is not as though Washington has a shortage of other business to be getting on with.

Ginsburg’s late-life celebrity reflected her quiet charisma and stirring personal achievements. But it also captured the oddity of American politics. In few democracies are judges so well-known and so cherished by their own “side”. In time, the US will have to examine whether such a politicised high court, one that each party dreads losing to the other, needs reform. The stakes of each nomination seem unhealthily high.

Until such a time, though, it is enough to reflect on the human and intellectual qualities that were lost last Friday. “An extraordinary American life” is the handsome phrase that Mr McConnell used about Ginsburg. A rush to replace her would be a strange way of honouring it.