The Guardian
Share on FacebookShare Share on TwitterTweet
Tributes come from Trump, Obama and across the political spectrum – but partisan divide and looming election are never far away 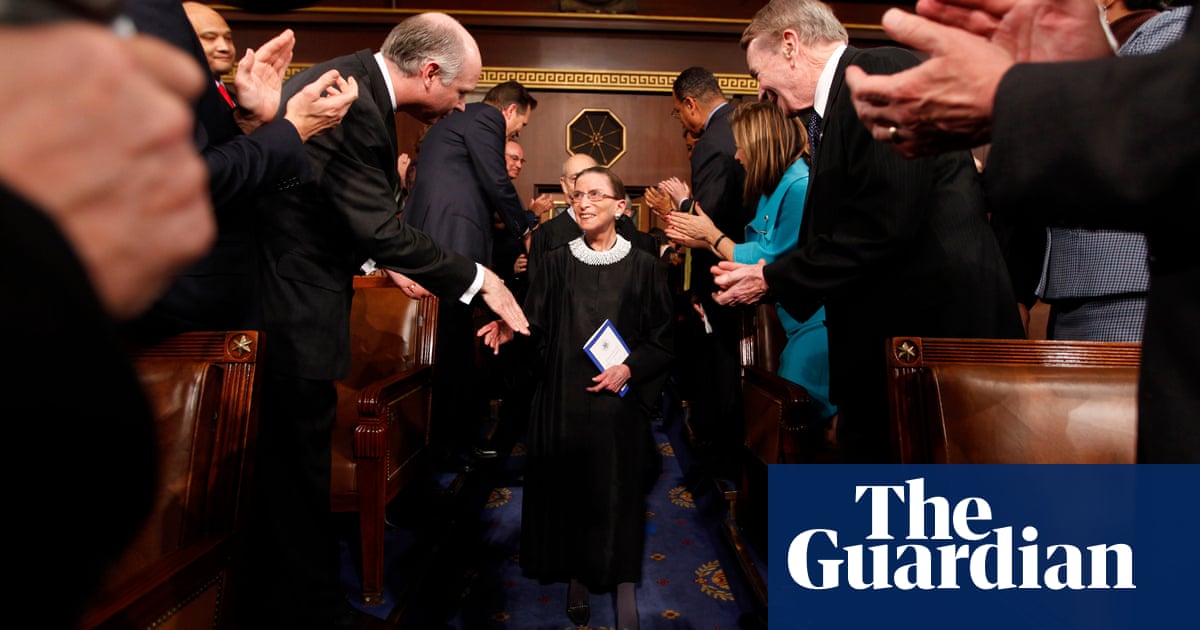 Ruth Bader Ginsburg will be honored with a statue in Brooklyn, the New York City borough where she was born and grew up.

The supreme court justice died on Friday at the age of 87, 27 years after her nomination by Bill Clinton.

“She redefined gender equity and civil rights and ensured America lived up to her founding ideals,” Cuomo said. “She was a monumental figure of equality, and we can all agree that she deserves a monument in her honor.”

In Washington, hundreds gathered on the steps of the court overnight, marking the passing of a justice who became a hero to liberals. Elizabeth LaBerge, a lawyer, said Ginsburg’s death was another blow for people who have made “serious law and order a mission of their lives”.

She never forgot where she came from, or those who sacrificed to help her grow into the historic icon we came to revere

“Who is going to take care of us?’ ” LaBerge, 36, told the Washington Post. “It just feels like such a deep loss at this particular time. It’s a lot to put on a woman of her age to keep us safe and functioning as a constitutional democracy.”

The California senator Kamala Harris, Joe Biden’s running mate in the presidential election, called Ginsburg a “titan”, “a relentless defender of justice” and “a legal mind for the ages”.

“Justice Ginsburg,” she said, “was known to pose the question, ‘What is the difference between a bookkeeper in the Garment District and a supreme court justice?’ Her answer: ‘One generation.’ She never forgot where she came from, or those who sacrificed to help her grow into the historic icon we all came to revere.”

On Saturday morning, Harris too visited the steps of the court.

“The stakes of this election couldn’t be higher,” she wrote. “Millions of Americans are counting on us to win and protect the supreme court – for their health, for their families, and for their rights.”

Trump, who has a chance to tip the court firmly to the right, was at first caught off guard. After stepping off stage at a campaign rally in Minnesota on Friday night, he described Ginsburg as “an amazing woman who led an amazing life”.

The president later issued a formal proclamation that remembered Ginsburg “for her brilliant mind and her powerful dissents at the supreme court”, and ordered flags flown at half-staff. On Saturday, Trump said he would move quickly to nominate a replacement, setting up a Senate fight just weeks before the election.

Biden said: “Ruth Bader Ginsburg stood for all of us. She was an American hero, a giant of legal doctrine, and a relentless voice in the pursuit of that highest American ideal: Equal Justice Under Law.” He also posted: “Let me be clear: the voters should pick a president, and that president should select a successor to Justice Ginsburg.”

Barack Obama, who nominated two women to follow Ginsburg on to the court, wrote: “Justice Ginsburg helped us see that discrimination on the basis of sex isn’t about an abstract ideal of equality; that it doesn’t only harm women; that it has real consequences for all of us. It’s about who we are – and who we can be.”

Justice Ginsburg paved the way for so many women, including me. There will never be another like her

Bill Clinton said: “America has lost one of the most extraordinary justices ever to serve on the supreme court … her landmark opinions advancing gender equality, marriage equality, the rights of people with disabilities, the rights of immigrants, and so many more moved us closer to ‘a more perfect union’.”

Hillary Clinton said: “Justice Ginsburg paved the way for so many women, including me. There will never be another like her. Thank you RBG.”

Sonia Sotomayor and Elena Kagan described Ginsburg as a “hero” and mentor. Clarence Thomas called her “the essence of grace, civility and dignity”, while Brett Kavanaugh said he learned from her “principled voice and marveled at her wonderful wit”.

Senator Lindsey Graham, the Republican chairman of the judiciary committee who will play a key role in the nomination, said: “While I had many differences with her on legal philosophy, I appreciate her service to our nation.”

Civil rights activist, Guardian columnist and NBA hall of famer Kareem Abdul-Jabbar remembered Ginsburg as “the best of us” and a champion of “equal opportunity and fair justice”.

“Ruth Bader Ginsburg was one of the fiercest, most intelligent defenders of equal opportunity and fair justice for all,” Abdul-Jabbar said on Saturday in a statement to the Guardian. “She was the best of us and her example brought out the best in everyone who believes in a truly democratic America.”

Erin Murphy, a law professor at New York University, remarked on Ginsburg’s friendship with the conservative justice Antonin Scalia, who died in 2016 and whose seat was held open by the Senate majority leader, Mitch McConnell, in defiance of political convention, until a new president could pick a replacement.

“What irony,” Murphy wrote, “that the deaths of Scalia and Ginsburg – the two revered justices from opposite ends of the political spectrum, famously best buds notwithstanding ideological difference – precipitated our extreme free fall into rancor and partisanship.”

Recently receiving the National Constitution Center’s Liberty Medal on the 100th anniversary of the ratification of the 19th amendment which gave women the right to vote, Ginsburg said she felt lucky to have joined the fight.

“It was my great good fortune to have the opportunity to participate in the long effort to place equal citizenship stature for women on the basic human rights agenda,” Ginsburg said. “In that regard, I was scarcely an innovator.”

The justice will be buried at Arlington national cemetery.