Vulture
Share on FacebookShare Share on TwitterTweet
It’s getting a little hard to figure out Mildred Ratched’s overall plan, but it clearly involves getting rid of anyone who gets her in way. 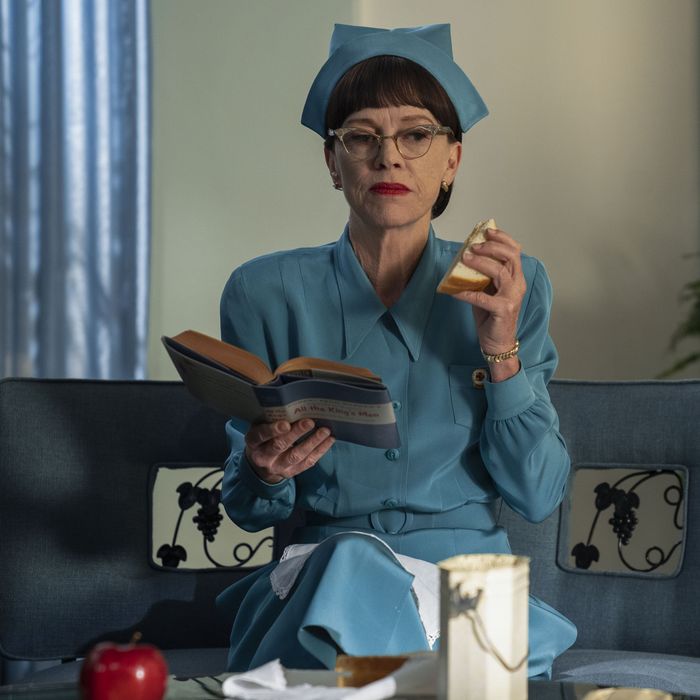 The first season of Ratched finally gets a major death, the kind of moment that would have lit up message boards back in the heyday of American Horror Story, when Ryan Murphy was working in a weekly format instead of a streaming service’s full-season drop. Poor Charles Wainwright. The truly inept private dick played by Corey Stoll doesn’t realize that the woman at the motel who he thinks is just a kinky fling is actually a total sociopath and will apparently do anything to protect her boss, Dr. Hanover, including killing her latest friend with benefits. It’s getting a little hard to figure out Mildred Ratched’s overall plan, but it clearly involves getting rid of anyone who gets in her way. The final scene sets up a battle between Ms. Osgood and Ratched in the second half of the season. The show may not be exactly where it seemed to be going from the start — and the connection between this character and the Kesey/Forman version is getting fuzzier instead of clearer — but a horror showdown between Sarah Paulson and Sharon Stone has some undeniable camp potential that could happen only in the Murphy-verse.

That being said, until the closing scenes, it’s hard to shake the feeling that Ratched is losing some of its focus. Who cares about Edmund and Dolly, right? Even Briggs is starting to feel like a pawn in Murphy’s kinky horror game, as she’s brought into the world of Ratched’s violence in a way that feels forced. Again, let’s try to pull back and ask what Ratched is about. It’s the story of a nurse trying to save her brother, who happens to be a deranged serial killer. How? Is she literally going to break him out? Given the unrealistic ease with which she wheeled him to the tub room for a rub and tug from Dolly, that would probably be easy, but it seems unlikely. Does she think she can cure him? A stronger version of this show would make the stakes and plans of its protagonist more defined. Ratched sometimes lacks urgency because of a sense that it’s being made up as it goes along.

Maybe Mildred Ratched is just figuring out her plan as she deals with the roadblocks in front of her one at a time. The writers seem to be figuring her out that way too. She is alternately portrayed as a savior and a sociopath, which fits with a woman who likes being seen as an “angel of mercy,” someone willing to do whatever it takes for what’s right. If that includes breaking out the lesbian couple before they’re subjected to more hydrotherapy or burning a man alive, so be it. But doesn’t Ratched’s morality and even sexuality feel inconsistently fluid? She’s willing to almost lose her job — which would destroy her plan for Edmund, by the way — to send away the lesbian couple of Cartwright and Ingrid. And she even claims to see them in a way that doesn’t exactly jibe with how much she has denied her own urges with Briggs. Although maybe she’s turning a corner there.

Whether she’s playing a long game or acting instinctively, Ratched comes to Charles and offers to help him stop Hanover at any cost. She figured out that he’s there trying to find her boss at the behest of Ms. Osgood. The two have more kinky sex, but this time Briggs listens through the door at the motel after leaving her sham marriage. It’s kind of a cheap way to bring Briggs deeper into the narrative and is amplified even more by a later nighttime visit that doesn’t make a ton of sense in terms of timing. Before then, Briggs tells Ratched something important: The governor will defund the hospital if Edmund is deemed unfit to stand trial.

Forget politics, let’s get wild. Murphy and his team layer Elmer Bernstein’s “Max” from Cape Fear into the soundtrack again and turn up the knob on their split-screen usage, indicating that things are about to get weird in a way that only a show from the creator of AHS can get weird. To be fair, Ratched lives up to its gross-out potential in this episode after Wainwright is boiled alive in the hydrotherapy tub. He somehow breaks out of the tub before dying and shambles down the hall, his skin practically falling off. This show has used monster-movie visual language before (and should do it more), and he looks like something out of a classic Hammer flick. He ends up being shot in the face twice by a guard, and his body is burned in the basement of Lucia. Rough way to go.

All of this happens with Briggs in the building, and she notices the blood on Hanover’s floor. Does she now know too much to make it through the next four episodes? Maybe Ratched suspects she needs to learn exactly what Briggs saw, because she invites her out on another date down the shore, ostensibly to celebrate leaving her husband. Or maybe Ratched helping two women find happiness together has allowed her to embrace her own sexuality? Only time will tell. However, it’s important that Ratched reached its halftime this season with a flashback to a formative event in the history of its title character, when she really became the angel of mercy and suffocated an injured soldier. To who else will she prescribe her mercy?

• What does the leech-using character played by Amanda Plummer think her cheap oceanside motel is used for other than infidelity? As Briggs says, it’s the only one in town, anyway. And where’s this character going? Is she just comic relief? The leech scene is pretty wonderful, though.

• Corey Stoll, we hardly knew ye. The first major death of the season comes to an actor who wasn’t given enough to do. I hope Murphy puts him in another project. He’s always good.

• The juxtaposition of Briggs talking about “true, full love” with Ratched’s saying, “Ice machine’s down the hall,” is funny given how coldly Ratched sees the world.

• Why do you think they have Bucket reading All the King’s Men every day at lunch? Random choice or thematic?

• How many drugs is Hanover addicted to? He was huffing last episode and injecting this one.

• Directing duties on this episode went to a great TV professional, Michael Uppendahl, who has helmed excellent episodes of Fargo, Castle Rock, and Ray Donovan. He shot two chapters of Murphy’s Hollywood and nine of his American Horror Story over the years. He’s perfect for this episode.

VULTURE NEWSLETTER
Keep up with all the drama of your favorite shows!
Terms & Privacy Notice By submitting your email, you agree to our Terms and Privacy Notice and to receive email correspondence from us.
Similar shots
This week's most popular shots
Topics of the week
Chelsea vs Arsenal Man United vs Liverpool Man City vs Chelsea Man United vs Leicester City Barcelona Eid Mubarak Liverpool La Liga Man utd Mother's Day
Hot topics