More expensive than Ronaldo: Misfiring Morata granted yet another second chance at Juventus

The striker has never scored more than 15 league goals for a club yet he has secured another major transfer, with the Spaniard returning to Turin

Alvaro Morata once told Goal, "When you have a bad time in a place, you don't often have the chance to return." Yet the Spaniard seems to be the exception to the rule.

He was unhappy at Atletico Madrid as a youngster but got the chance to rejoin his childhood club in 2019.

He became frustrated with his lack of game time at Real Madrid but was re-signed by Los Blancos in 2016.

He struggled during his second season at Juventus but has now been welcomed back to Turin.

That would be truly remarkable, given we're talking about a striker who has never scored more than 15 league goals across a solitary campaign. In addition, only once in his career has he reached 20 goals in all competitions, at Real Madrid in 2016-17.

It was after that season, in which he proved an excellent understudy to Karim Benzema, that Chelsea forked out a then club-record £60m ($76m) for the Spain international. However, after a promising start, Morata flopped spectacularly at Stamford Bridge.

Incredibly, Chelsea still managed to recoup a significant chunk of their money, as Atletico agreed to re-sign their former youth-team player for a staggering £58m ($74m), after an encouraging loan spell in his hometown.

And now, after an underwhelming 18-month stay at the Wanda Metropolitano, Morata has landed a move back to Juve.

Agent Juanma Lopez is clearly very good at his job. 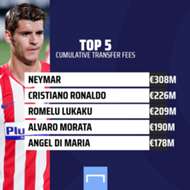 Morata is obviously talented; Antonio Conte called him the complete player, while Diego Simeone previously said there aren't many forwards like him in the game today.

However, it is nonetheless unbelievable that a number nine who has never scored more than 25 league goals for a club continues to attract such interest from elite clubs.

Then again, his return to Juve has as much to do with desperation and familiarity than consistency and quality. Morata was by no means Juve's first-choice forward. Had they been flush with cash, they would certainly not have been considering the Spain international.

As it was, though, the Bianconeri were exploring low-cost options to replace Gonzalo Higuain in attack. Edin Dzeko was Andrea Pirlo's preferred option but the Bosnian's transfer to Turin was scuppered by Napoli striker Arkadiusz Milik's refusal to replace him at Roma, while Luis Suarez's hopes of joining the Serie A champions were dashed by his passport problems...

Consequently, Juve were forced to settle for Morata, who, revealingly, was outperformed in Spain last season by the 33-year-old Suarez, who is now set to replace him at Atletico. Morata scored five fewer goals (16) and racked up seven fewer assists (four) than the Barcelona No.9 (21, 11) in all competitions.

Some Madrid-based journalists are, therefore, disappointed that Morata has again decided to walk away from a challenge, rather than face up to it. Indeed, there is a belief among certain sections of the Spanish press that he has been once again poorly advised by those around him.

Of course, a case can be made in favour of a move to Juve. Firstly, Morata, who is five years younger than Suarez, should be better suited to the kind of pressing that Pirlo is demanding of his forwards.

The Spain international also boasts the kind of versatility admired by his new boss, who has been at pains to point out that his footballing philosophy is more preoccupied with fluidity and functionality than formations and flair.

Morata, in that sense, should fit right in, given he has never been a conventional number nine. Indeed, he had to learn how to play as a wide attacker in his days with Real Madrid Castilla because Joselu was the team's first-choice centre-forward.

Pirlo obviously knows Morata's strengths – and weaknesses – well, given they played together at Juve during the club's run to the final of the 2014-15 Champions League, with the striker netting five times in the knockout stage.

And that existing relationship will certainly be key in terms of helping Morata, who turns 28 next month, belatedly realise his full potential.

Morata is, essentially, the ultimate confidence player; one of those strikers who goes on goalscoring streaks after enduring lengthy droughts. The first man since Alessandro Del Piero to score in five consecutive Champions League games for Juventus also went four months without netting in Serie A at one point.

It was during that difficult second season in Italy that Morata suffered an almost total loss of self-belief, which was only truly restored by his wife, Alice Campello, whom he met on a night out in Milan.

Morata, though, has subsequently experienced tough spells at Chelsea and, most recently, Atletico. In the past, he has blamed injuries, coaches, fans and even his own team-mates for his struggles, with wildly differing degrees of validity.

At the same time, he has also admitted being sometimes unable to cope with the intense pressure that comes with being a big-money signing, as opposed to a reliable reserve.

Gianluigi Buffon and Maurizio Sarri are among those to have previously discussed the attacker's mental fragility and Morata has been open about the fact that he needs to feel happy, to feel loved, if he is to succeed.

He is renowned as a humble and engaging character, a footballer who truly loves the game, but he can also be painfully shy and introspective, resulting in him often spending hours agonising over his misses and mistakes.

So, it is a major positive that he will find plenty of support in Turin – the fans have fond memories of his many big-game goals during his first spell at the club, while he will also be greeted by a number of familiar faces.

Not only is Pirlo now in charge, and Buffon still on Juve's books, his good friend and former team-mate Simone Zaza is now plying his trade for cross-town rivals Torino, meaning Morata will be surrounded by loved ones in his wife's homeland.

He says he is happy to be back in Turin, but he said the exact same thing when he returned to Madrid. We have heard it all before, so the time for talking is over. There can be no more excuses.

Morata has been fortunate enough to be granted yet another chance to prove himself at a former club. If he fails to take it, even he is unlikely to be afforded another one.