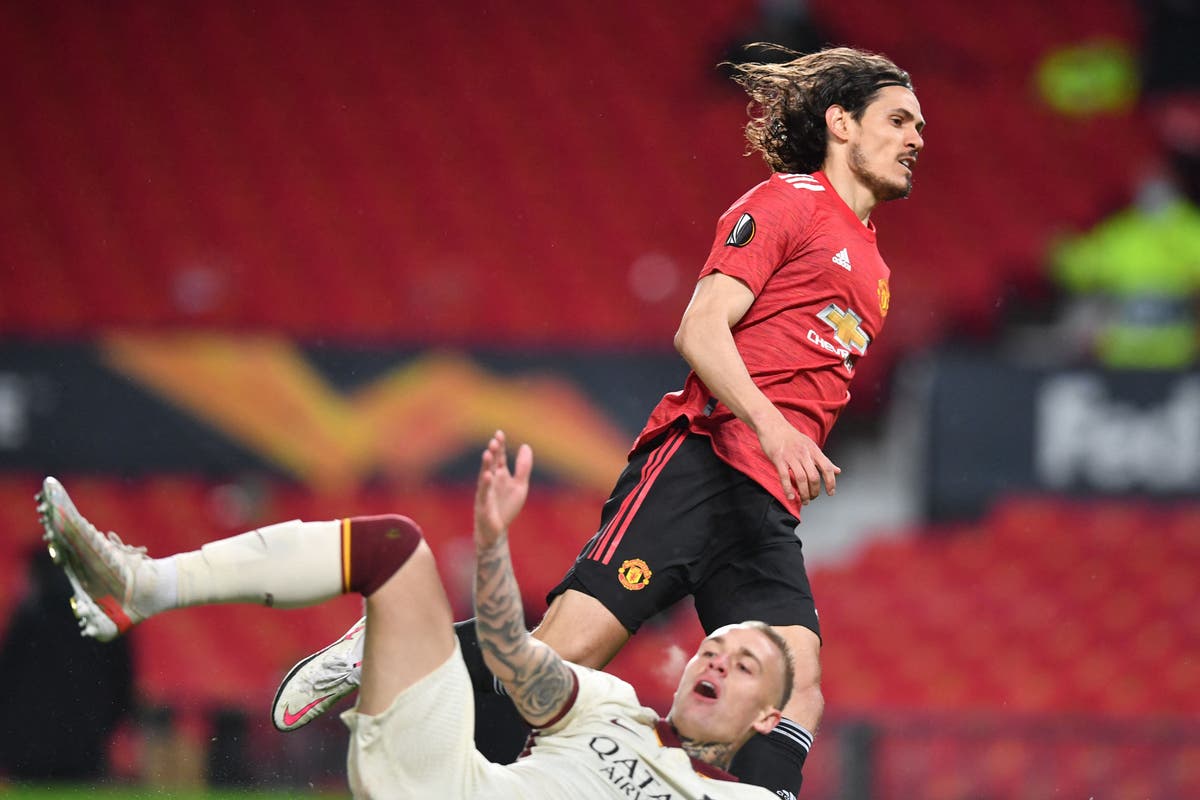 Manchester United handed Roma another heavy defeat at Old Trafford, winning 6-2 thanks to two goals apiece from Edinson Cavani and Bruno Fernandes to move within sight of the Europa League final.

Fourteen years after getting thrashed 7-1 in the Champions League quarter-finals, Roma imploded again at the Theatre of Dreams after leading 2-1 at half-time in the first leg of this semi-final.

Ole Gunnar Solskjaernow look set to end his struggle in the semis of major competitions, having lost at this stage on four occasions in the past 16 months alone - including to Sevilla in last season’s Europa League.

United boss Solskjaer enjoyed his side’s second-half display, telling BT Sport: “I don’t feel the job is done, but it was a good job done. We did well but we know they have quality.

“They scored two goals from the two chances we gave them. The second half was very good.

“We know we have got creative players who can create big moments. Paul Pogba was very good in that position, he’s allowed some freedom. The difference today is we took most of our chances.

“Maybe at the end of the first half, we didn’t look great but we got ourselves together. The two goals are junior, schoolboy errors that shouldn’t happen at this level.”

“I don’t know how to tackle. Why should I tackle? I need to practise more. I need to tackle without arms. It’s unlucky for me. But it’s OK. We are confident still.”

“The result is positive but it’s not finished, there is one more leg. We have to stay focused and play the next game with the same mentality,” he told BT Sport.

“First half we made two mistakes and conceded two goals. After half-time we said just do the right things. We were motivated to score as many goals as possible.”

Pogba has been speaking to BT Sport and just joked that he should practice tackling “with no arms”.

In fairness, he did slide in with his arms up in the air, but each side got a soft penalty so it probably evened itself out.

After that whirlwind match, we will bring you all the latest news and reaction from Old Trafford.

That was an incredible second half performance from United, which saw their big players show up. Fernandes, Cavani and Pogba were all exceptional. 6-2 in no way flatters them. They are in the final - even if we are only halfway through this tie.

It says as much about this United side that at half-time, the tie was in serious jeopardy - but by the full-time whistle, United boast a four-goal lead heading into the second leg in Rome.

And breathe. What a stunning game of football!

This has been the perfect example of United this season - awful in the first half, and majestic in the second. Five goals after the break have effectively booked a Europa League final spot.

Two minutes of injury time - that feels like it’s for Roma’s benefit.