CNN International
Share on FacebookShare Share on TwitterTweet
Barcelona star Luis Suarez has been accused of passing a rigged Italian language exam amid a potential move to Juventus, according to Italian prosecutors.
Uruguayan international Suarez underwent a language test on September 17 at the University for Foreigners of Perugia where he was examined by two teachers in both oral and written production and comprehension.
The university rector later announced that Suarez had passed and obtained a B1 level linguistic certificate of knowledge of the Italian language. The B1 certification is required to obtain Italian citizenship through marriage.
According to Reuters, Suarez's wife Sofia Balbi is of Italian descent. By Suarez gaining Italian citizenship, Juventus could sign him without exceeding its permitted quota of non-EU players.
Visit CNN.com/sport for more news, videos and features
However, following Suarez's test, five employees of the University for Foreigners of Perugia have been placed under investigation, a prosecutor's document shows. Among them are the university rector, the general director and several teachers. 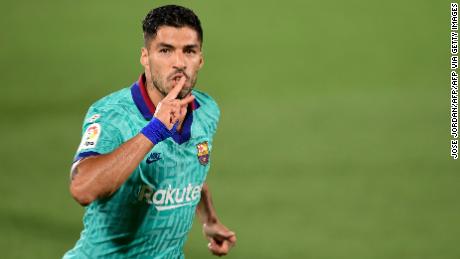 According to the chief prosecutor, the five employees could go to trial for revealing official secrets and ideological falsehood, while Suarez is not currently under investigation.
"During the investigation carried out since February 2020 by the Financial police of Perugia for different cases related to the University for Foreigners of Perugia, irregularities emerged in the certification of the Italian language test carried out on September 17 by the soccer player from Uruguay, Luis Alberto Suarez Diaz," said a statement from Raffaele Cantone, the chief prosecutor in Perugia.
"From the investigation, it emerged that the topics of the exam were previously agreed with the candidate and that the final score of the exam was established ahead of the exam, although an elementary knowledge of the Italian language appeared on the online classes with the university teachers."
In a conversation intercepted by investigators only two days before the exams, one of Suarez's teachers, Stefania Spina, acknowledged the forward "doesn't speak one word of Italian" and shouldn't pass the exam, but that "he will, since you can't blow up 10 million euros ($11.7 million) of a seasonal salary just because you don't have a B1," according to the prosecutor's statement. 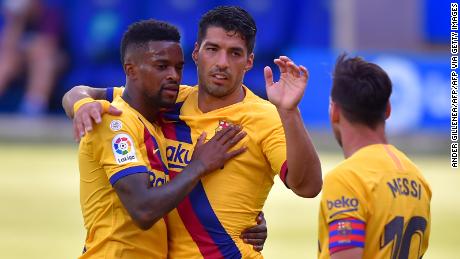 The University for Foreigners of Perugia issued a statement saying the examination carried out by the footballer was done "with correctness and transparency," adding that it "hopes ongoing research will clearly confirm this."
Spina did not immediately respond to CNN's request for comment, while Juventus made no comment.
CNN Espanol contacted Suarez's representative but did not receive a response.
Suarez, who has scored 198 goals in 283 appearances for Barcelona, is no stranger to controversy.
He was banned for nine games for biting Italy's Giorgio Chiellini at the 2014 FIFA World Cup and was also handed bans for biting opponents in 2010 and 2013 while playing for Ajax and Liverpool, respectively. While at Liverpool, Suarez was also banned for eight games for racist remarks towards Manchester United's Patrice Evra.
Barcelona has now agreed to allow Suarez to join La Liga rival Atletico Madrid.
"I am very proud of everything I did," said Suarez on Thursday. "My children have seen me score goals, win trophies and play alongside extraordinary players and above all alongside the best player in the world.
"I have experienced many moments that will remain in my memory. The first league title, the Champions League, to play with wonderful players. It has been incredible.
"I have had six spectacular and wonderful years with great teammates and the people around the club, which I will remember."
Similar shots
This week's most popular shots
Topics of the week
Chelsea vs Real Madrid Man United vs Liverpool Man City vs psg PSG vs Man City Man United vs Roma International Workers' Day Dare Adeboye Newcastle vs Arsenal Barcelona vs Granada Villarreal vs Arsenal
Hot topics