Right then, with that win, Bangalore have 12 points now, with 6 wins from 9 games. They have consolidated their position at No. 3 in the points table. For Rajasthan, it is the reverse, 6 losses in their 9 games. Things are looking pretty bleak for Rajasthan from here. They need to pull a rabbit out of the hat, if they are to reverse their fortunes. Right then, Super Saturday means double the excitement. Yes, Delhi are taking on Chennai at Sharjah. Switch tabs and catch our coverage of the same.

Earlier, after winning the toss, Smith opted to bat first in the searing Dubai heat. It was a good and yet tricky start for Rajasthan, as they started well but lost their top-order quickly. They recovered well to post 177 later on. Their bowlers kept a tight noose from the start, but allowed it to slip away later on. It went down to the wire but Bangalore pulled off a spectacular win.

For Rajasthan, well, they had Kohli's men in quicksand but failed to contain the de Villiers blitzkrieg, which allowed the game to slip away. It was a case of so-near, yet so far for them. Gopal, Tewatia and Tyagi bowled well, taking 1 apiece and were economical by the match's standards as well. Unadkat took a pounding and surprisingly, their key bowler, Jofra Archer, went wicketless and conceded close to 10.5 runs per over. They would be ruing this opportunity which was well within their reach, but slipped away, as they took their foot off the pedal.

Bangalore started off well, Padikkal opting to play second fiddle to Finch's hitting. But it was a short blitzkrieg as Finch departed after two biggies. And then, walked Kohli, to the middle. It was a very watchful passage, with Kohli going for his trademark 2s, while Padikkal lashed out at the loose deliveries and kept rotating the strike otherwise. The left-handed batsman later fell for a near-run-a-ball 35. Because he and the skipper started motoring late, the required rate started climbing up. Kohli followed Padikkal and two new batters out in the middle. Things got tough for Bangalore as there was some confusion between Mann and de Villiers, with either possibly running themselves out. In the end, they rode through that, de Villiers smashed a superb unbeaten 55 from 22 balls. Mann provided the required assistance at the other end and Bangalore cruised home with 2 balls to spare, sparing a Super Over prospect.

Bangalore, what a thumping win in the end, here in Dubai. Spoils our hopes for a Super Over but boy do we not love to see him finishing off in such fashion. A huge win for Kohli's men.

19.4 overs (6 Runs) SIX! WOW! Game, set and match for AB de Villiers and Bangalore! What a shot to end the game! Archer goes for the yorker on the toes, de Villiers is deep inside his crease. He manages to get under the ball and whips it over deep mid-wicket for a biggie. BANGALORE WIN BY 7 WICKETS!

19.3 overs (2 Runs) Two now! Full and around off, de Villiers drills it down the ground. Before the long off fielder can get around, two taken. Bangalore just a hit away!

19.2 overs (1 Run) Single! De Villiers is back on strike. 7 needed in 4. Banged short and on middle, Gurkeerat looks to pull but the ball gets big on him. The ball hits the upper part of the bat and lobs towards mid-wicket. Single taken.

19.1 overs (2 Runs) Couple to begin the over! A low full toss on middle, Gurkeerat flicks it wide of the deep square leg fielder. Tewatia does well to get to the ball, easy two. De Villiers is away from the strike again.

Jofra Archer to bowl the final over of the match. 10 runs needed. Can Bangalore get it? Or are we in for a Super Over? A long time since the last one.

18.6 overs (1 Run) A single! 25 off the over. Full and wide outside off, Gurkeerat drills it down to sweeper cover for one. Gurkeerat will keep the strike. 10 needed in the last 6 balls.

18.5 overs (4 Runs) FOUR! Gurkeerat joins the act now and Unadkat is getting a beating. Not sure if Unadkat was the perfect choice to bowl the penultimate over. Short and wide outside off, Gurkeerat slams it over cover-point and finds the fence. 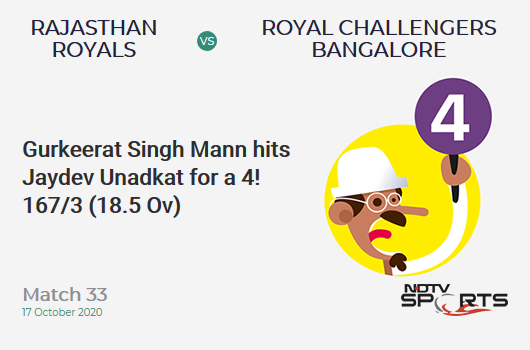 18.5 overs (1 Run) WIDE! A slower bouncer on middle and leg. The fingers are rolled on this one. It takes ages to get to the batsman. Gurkeerat tries to hammer it but misses. Wided for the height.

18.4 overs (1 Run) Finally bowls a yorker outside off, ABD pushes it down to sweeper cover for a run.

18.3 overs (6 Runs) SIX! Three in a row! This is terrific stuff! Short and on middle, not pacy at all. De Villiers swivels and powers it over deep square leg for a biggie. 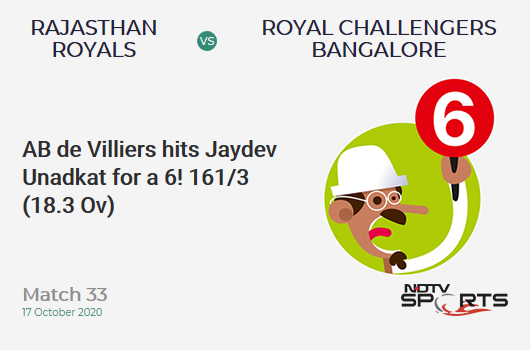 18.2 overs (6 Runs) SIX! Two-in-two! And this one is even bigger. You just can't be bowling in the slot of de Villiers. Unadkat does that and gets slammed way over long on. Huge six. Unadkat under massive pressure. 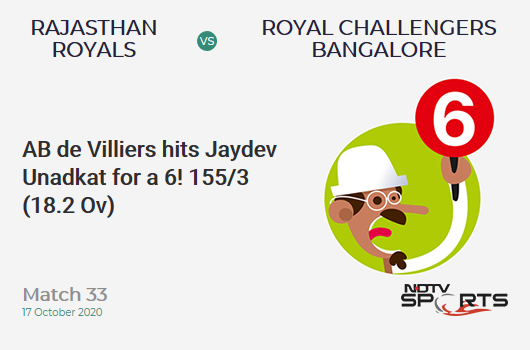 18.1 overs (6 Runs) SIX! ABD starts with a bang! A massive six to begin the over! A length ball in the slot of de Villiers. It is the slower one. De Villiers powers it way over the deep mid-wicket for a massive six. 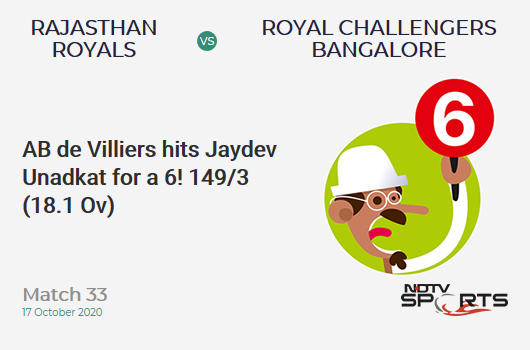 17.6 overs (1 Run) Single to end the over! A very good one from Kartik. Full and around off, de Villiers pushes it towards long off for a run. He will keep the strike for the next over. 35 needed in 12.

17.5 overs (3 Runs) Three! Good effort from Unadkat. Kartik goes full and wide outside off, Gurkeerat manages to steer it over short third man. Unadkat there leaps high and gets a hand to it but it doesn't stick. It goes to third man and they take three runs.

17.4 overs (0 Run) Excellent delivery! Full, fast and around off, Gurkeerat looks to slog but misses.

17.2 overs (4 Runs) FOUR! Nicely done! There was nothing wrong with the ball but AB de Villiers is so good. He manages to dig it out through cover-point and it races away to the fence. 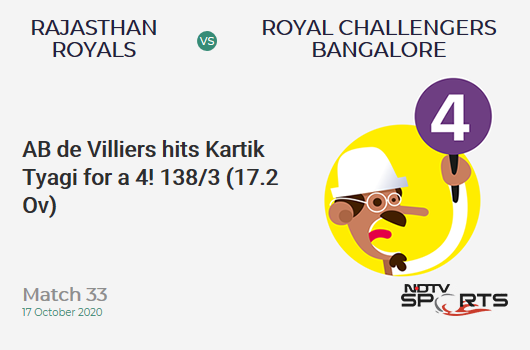 16.6 overs (2 Runs) NOT OUT! Yes, de Villiers is very quick and safe! He would've had his heart in his mouth though when the ball went high in the air. Slower one outside off, de Villiers looks to slog it away but gets a top edge but the ball lands to safety. They go for the second run. Unadkat, the bowler, runs to the ball and fires the throw to the keeper who takes the bails off. The third umpire has been called in. Replays confirm de Villiers is safe.

16.5 overs (6 Runs) SIX! BOOM! Full and wide again but this time it is de Villiers on strike. He reaches out and slams it over sweeper cover for a maximum. 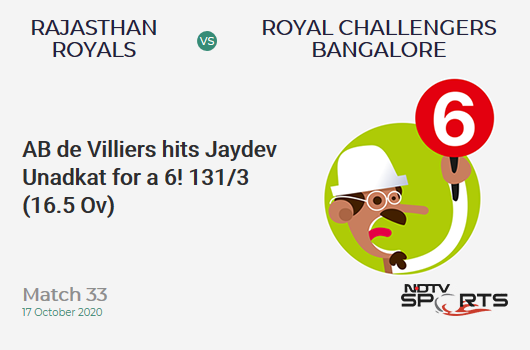 16.4 overs (1 Run) Finally gets off the strike. Full and wide again, this time Gurkeerat manages to connect it well and push it through covers for a run.

16.3 overs (0 Run) Three dots in a row! Full and wide outside off, he tries to reach out but gets a bottom edge to the keeper.

16.2 overs (0 Run) Change of pace again! Excellent bowling. Slower one and outside off, this time Gurkeerat jumps out of his crease to hammer it but misses.

16.1 overs (0 Run) Play and a miss! Good start from Jaydev. The slower one from him. It is good length and outside off, Gurkeerat is beaten for pace as he tries to force it on the off side.

DRINKS! 54 needed in 4 overs. AB de Villiers is out there! As long as he is there, one would assume that he can take his side home. Rajasthan would want to see him going back as quickly as possible. Let's see who raises their hand to remove the dangerous man. We are in for a thriller it seems. Also, Jaydev Unadkat is back on.

15.6 overs (0 Run) Full and wide outside off, driven hard but straight to the cover fielder. 10 off the over!

15.5 overs (6 Runs) SIX! THUMP! Much-needed biggie! Short and outside off, de Villiers moves inside and powers it way over deep mid-wicket for a bigige. 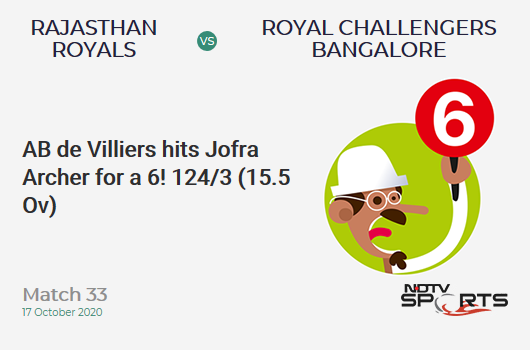 15.4 overs (1 Run) 4 singles in a row! Singles won't hurt Rajasthan. A short ball on the body, Gurkeerat looks to pull but doesn't manage to middle. It hits the upper part and goes to fine leg. A single taken.

15.3 overs (1 Run) One more single! Very full ball on middle, it is stroked down to long on for one by ABD.

15.2 overs (1 Run) Full and on middle, Gurkeerat flicks it to deep square leg and gets to the other end.

15.1 overs (1 Run) Full and on middle to begin, de Villiers flicks it down to deep mid-wicket for a single.

Topics mentioned in this article