Liverpool FC
Share on FacebookShare Share on TwitterTweet
Liverpool eased into round four of the Carabao Cup via a comprehensive 7-2 victory over Lincoln City on Thursday night.

Liverpool eased into round four of the Carabao Cup via a comprehensive 7-2 victory over Lincoln City on Thursday night.

A wonderful free-kick from Xherdan Shaqiri opened the scoring at the LNER Stadium, before braces from Takumi Minamino and Curtis Jones were supplemented by late strikes by Marko Grujic and Divock Origi.

Read on for five talking points on the third-round action…

Another effervescent and productive display from Jones was acknowledged with the Man of the Match award.

"Every game that I play it's an opportunity for me and the rest of the lads. Every game that I'm called upon, I've always said that I'll give 100 per cent. It's what I try to do," the 19-year-old Scouser said post-match.

"I think the performances go and show a glimpse of what I'm capable of doing. But I've still got a lot to learn and I need to be patient and my time will come."

Jones' superb first-half double saw him become the youngest player to score two or more goals in a game for the Reds since Raheem Sterling did so against Norwich City back in April 2014, and the Academy graduate has now netted five times in 16 first-team appearances.

"I think everybody knows my opinion about Curtis Jones. He is an exceptional talent and we will have some fun with him, I'm pretty sure, in the future," surmised Jürgen Klopp.

'A masterclass in finishing'

That was how Lincoln boss Michael Appleton described Liverpool's cold efficiency in front of goal before the break, with Shaqiri and Minamino joining Jones in producing unstoppable strikes.

"I thought we saw a masterclass of finishing from Liverpool in the first half. If we put a bucket in the top corner, they would have hit it every time. There were some fantastic finishes. You get punished by these types of sides," Appleton stated.

"We got punished by one or two errors. But the reality is the difference in the first half was the finishing. I think all the goals apart from maybe the fourth goal were right in the top corner, making it really difficult for Alex [Palmer] in goal."

The statistics back Appleton's assertion up, too, with the ruthless Reds becoming the first Premier League team to score at least four times from outside the penalty area in the same match since April 2007.

Arsenal at Anfield in the fourth round of the Carabao Cup – we've been here before, haven't we?

Last season, Liverpool hosted the Gunners at the same stage of the competition and edged a helter-skelter, 10-goal affair on penalties following a thrilling 5-5 draw that left Klopp smiling.

"I can't remember the last time I had so much fun in a football game!" beamed the boss.

Jones converted the winning spot-kick in front of the Kop after Origi had forced the tie into a shootout with a stoppage-time equaliser.

More of the same when the sides meet again next week, then?

The night also produced a total of three Liverpool debuts.

Kostas Tsimikas made his first competitive appearance for the club by starting the tie, while Diogo Jota appeared as a 57th-minute substitute.

Jota, meanwhile, nearly got on the scoresheet with a low powerful drive that went just past the post.

But there was a surprise inclusion for 19-year-old defender Rhys Williams, who spent last season on loan with Kidderminster Harriers. 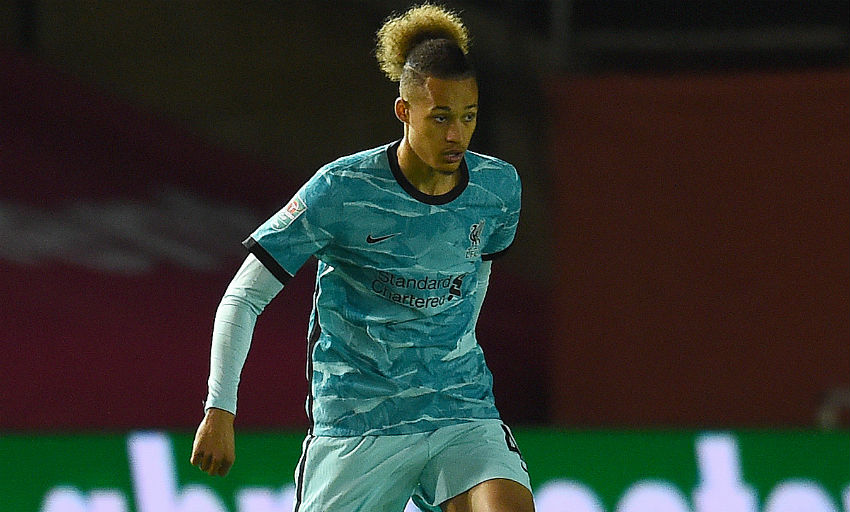 The Academy centre-half had suspicions about a first-team opportunity when left out of the U21s' EFL Trophy fixture with Wigan Athletic.

"It's a moment me and all my family dreamed of since I was a kid signing at nine," he said after his senior bow.

Williams was composed and solid at the back with Virgil van Dijk for the first half before then being accompanied by Fabinho after half-time.

History made with result

A not-so-typical scoreline indeed – and an historic one.

The result represents Liverpool's first-ever 7-2 victory away from home.

In fact, the last time the club recorded a 7-2 win was way back in 1935 against Grimsby Town in the First Division.

Under Klopp, Liverpool have scored seven times on two occasions. They both came in the 2017-18 Champions League campaign, doing so away at Maribor and then against Spartak Moscow at Anfield.