ESPN
Share on FacebookShare Share on TwitterTweet
Get a report of the Leicester City vs. Newcastle United 2020-21 English Premier League football match. 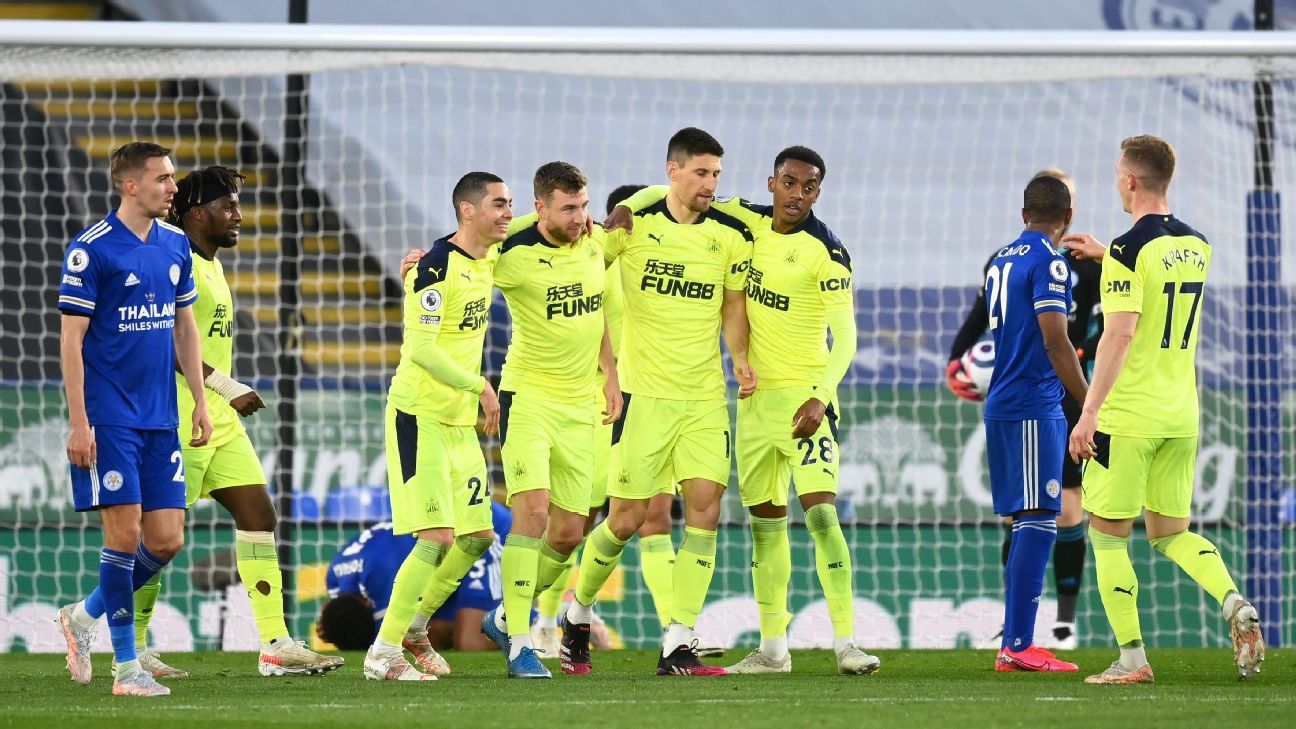 Callum Wilson's double helped Newcastle United to a thumping 4-2 win away to Leicester City on Friday which all but secured their Premier League survival and left the hosts looking over their shoulders in the race for a top-four finish.

Third-placed Leicester's night began badly when defender Jonny Evans was injured in the warm-up. It rapidly deteriorated when a mistake by Caglar Soyuncu allowed Joe Willock to put Newcastle in front after 22 minutes with his fourth goal in his last four games.

Martin Dubravka made some crucial saves for Steve Bruce's side before Paul Dummett doubled their lead with a powerful header after 34 minutes.

Leicester, who will play in next weekend's FA Cup final against Chelsea, never really got going and there seemed no way back when Wilson made it 3-0 on the counter-attack in the 64th minute and stabbed home his side's fourth 10 minutes later.

Marc Albrighton and Kelechi Iheanacho scored late goals and Dubravka made a sensational save from Ayoze Perez as Leicester threatened an unlikely comeback.

However, it was too late to prevent an eighth home league defeat to open the door for the teams below them.

Newcastle climbed to 13th place with 39 points from 35 games and are 12 points clear of third-from bottom Fulham who have four games left.

"It is going to be tough for teams to catch us now. It is a massive step in the right direction," Dummett said.

Though Leicester are still well-placed to finish in the top four, their last three league games are against Manchester United, Chelsea and Tottenham Hotspur and there is the fear that, like last season, they could miss out.

"We made so many mistakes and you can't afford to do that," Leicester boss Brendan Rodgers said. "It's a period of the season where you need to be super concentrated but we lacked concentration and when you do that against good players they will punish you and that's what happened."

Losing Evans was inconvenient but should not have resulted in Leicester's defensive meltdown.

Newcastle could have scored three times before they actually did with Kasper Schmeichel making one outstanding save to keep out Allan Saint-Maximin's point blank effort.

Soyuncu then lost possession in a dangerous area and Willock, on loan from Arsenal, raced through to score.

Jamie Vardy looked poised to halve the deficit on the stroke of halftime when he went clear but his attempted lob was kept out by a flying Dubravka.

Leicester pushed forward after the interval but were caught out on the break in the 64th minute when Ritchie's pass released Wilson who coolly rounded Schmeichel before sliding home.

Wilson then slotted in a rebound after his initial effort hit the woodwork.

There were some late nerves though for Newcastle and had Dubravka not kept out Perez's effort in stoppage time, it could have got ugly but they held on to secure a third win in five games.