BBC Sport
Share on FacebookShare Share on TwitterTweet
Leicester come from behind to maintain their 100% Premier League start against an under-strength Burnley side at the King Power Stadium. 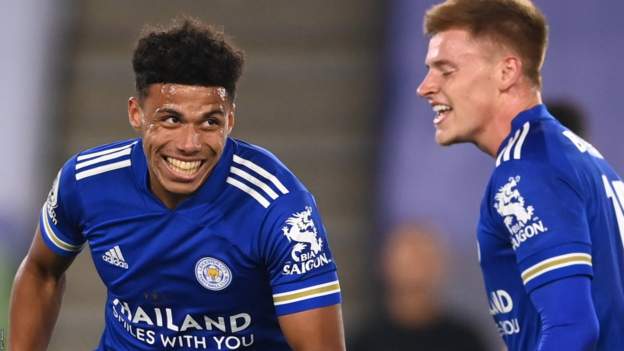 Leicester came from behind to maintain their 100% Premier League start against an under-strength Burnley side at the King Power Stadium.

The result lifts Leicester to the top of the Premier League for the first time since they won the title in 2015-16.

It also gave Brendan Rodgers his 100th win as a Premier League manager in his 210th game - Sir Alex Ferguson, Sir Kenny Dalglish and Kevin Keegan the only British managers to have reached the landmark in fewer matches.

Chris Wood opened the scoring for Sean Dyche's side, firing into the bottom left corner after outmuscling home defender James Justin at the far post.

But the Foxes, who enjoyed the majority of possession against opponents who were missing several first-team players, immediately responded with Harvey Barnes' placed effort drawing them level.

Erik Pieters' own goal put the hosts ahead after the break with Justin doubling their advantage.

While Burnley's determination and desire was admirable, in the end it proved no match for Leicester's fluid attacking play and extra sharpness.

The home side controlled the ball throughout with Barnes and Belgian midfielder Praet coming to the fore on the left of midfield.

Whether it was going directly up against Burnley right-back Phil Bardsley or moving intelligently into infield positions, Barnes' movement and pace was a key ingredient of Leicester's attacking play.

His placed effort to equalise was a show of composure as Burnley defenders reacted to Castagne's cut-back.

And he forced a wonderful save from Pope at the end of a teasing run in off the left wing that Bardsley could do little to prevent.

The England U21 international had more shots (five) than any other Leicester player but his final contribution of the evening was significant one in another way, as he skipped away from three defenders to pick out Praet who did the rest with a sublime effort.

Depleted Burnley fight to the end

Dyche has repeatedly talked about the need for Burnley to add to their squad since top-flight football returned in June and conceded that they would be "stretched to the limit" for this fixture.

And although he will be disappointed by the outcome and the unfortunate manner in which they fell behind, Pieters inadvertently deflecting Timothy Castagne's cross past Nick Pope, he would have been delighted by the application of his depleted team.

Already without five first-choice players and at the physical disadvantage of having not played last weekend, the Clarets' task was made harder when midfielder Robbie Brady went off with a rib injury during the first half.

But there were plenty of positives, with Dyche's side managing more efforts on goal than the hosts and threatening to set up a tense finale when Wood hit the post late on.

Dunne, 22, also acquitted himself well in the absence of Ben Mee and James Tarkowksi at the heart of the Burnley defence, his eight clearances more than any other player on the pitch.

'Barnes was outstanding' - what they said

Leicester City manager Brendan Rodgers speaking to BBC Match of the Day: "Burnley are a very difficult side to play against. They went ahead but we kept attacking the game and looked very good going forward.

"We are a bit patched up at the back but Wilfred Ndidi was incredible stepping in there from midfield.

"When it gets to 3-2 you have to stay calm and believe in your quality, see it through and we managed to do that.

"Harvey Barnes was outstanding tonight, he keeps on getting into areas you want him to and is a big talent."

Burnley manager Sean Dyche speaking to BBC Match of the Day: "I'm pleased with a lot of aspects of our performance, but obviously you don't want to concede four goals.

"It was a really strange game. We had as many open chances as they did, but we've only managed to take two of ours.

"I've always marvelled at the spirit in the group. We don't go over easy and we were still creating chances at the end. That is something that has served us well in the Premier League."

Burnley's own goal misery - the stats What's next?

Leicester host Arsenal in the third round of the Carabao Cup on Wednesday 23 September (19:45 BST) before returning to Premier League action at Manchester City on Sunday 27 September (16:30 BST).

Burnley are also in EFL Cup action at Millwall on Wednesday 23 September (19:00 BST) prior to welcoming Southampton to Turf Moor in the Premier League on Saturday 26 September (20:00 BST).

Player of the match