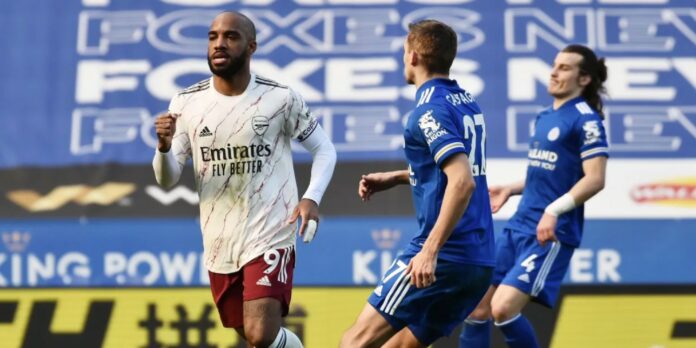 A much-rotated Arsenal came from behind to seal an impressive 3-1 win against Leicester at the King Power.

Youri Tielemans gave the home side an early advantage when he drove past Leno on six minutes but the Gunners turned things around before the break thanks to a David Luiz header and Alex Lacazette’s penalty, awarded for a handball by Wilfred Ndidi.

After the break, Pepe rounded off a sweeping move to open a two-goal advantage that we closed out thanks to some dogged and disciplined work at the back.

Having only returned to England on Friday after the win over Benfica in Athens, it was little surprise that Mikel Arteta opted to rotate. That said, few were expecting as many as six changes.

At the back, Bellerin and Gabriel were replaced by Cedric and Mari. In midfield, Elneny, Willian and Pepe took over from Ceballos, Saka and Odegaard and up top Lacazette was selected ahead of Aubameyang. In addition to those switched out, the presence of Partey and Martinelli made for a very strong bench.

After a very tentative opening five minutes by both sides, Arsenal, possibly bored by the slow tempo, went in two-footed on the self destruct button.

Out on the left flank, Xhaka tried to find Willian with a ball that didn’t look particularly sensible given he was closely marked by Tielemans. The Belgian nicked the ball away from the Brazilian, used Iheanacho as a block to get round the Swiss and suddenly, with Tierney caught upfield out of position, had a free run on goal. For some reason, rather than step across to cover the gaping hole in our defence, Pablo Mari kept back peddling and back peddling and back peddling. Eventually, it was just too tempting for Tielemans to shoot. His effort was hard and true on the diagonal and left Leno with no chance. It was embarrassingly bad defending. (1-0)

The home side might have doubled their lead almost instantly when Leno playing out from the back had a pass pounced upon by Vardy. Thankfully, the striker’s touch deserted him and the ball bounced back to the German. A lucky escape.

We thought we had a route back into the game on 12 minutes when Pepe was felled in the area by a combination of Ndidi and Tielemans. At first glance, it looked like a penalty, which is what referee Paul Tierney gave, but VAR overruled after spotting initial contact was just outside the box. Pepe’s attempt from the free-kick was blocked.

What followed was a decent period of Arsenal dominance. Granted, Barnes and Iheanacho both tested Leno with efforts from range, but we actually controlled the game and started to work eye-catching openings. Pepe had a shot blocked from a Tierney cutback and Willian hit with a snatched effort from the edge of the box.

Pepe’s presence on the right was a constant threat to Leicester. He was twice taken out by youngster Thomas and again by Soyuncu. A third foul by Thomas, who looked very nervy, earned him a booking. On the right side of the box, the Ivorian stood over the ball with Willian discussing who was going to take charge. The Brazilian, spotting a David Luiz dart to the penalty spot, whipped in a ball and the centre-back headed past Schmeichel. A nicely worked goal and well deserved after solid 20 minutes of domination. (1-1)

In the aftermath of the goal, Smith Rowe went down holding his leg. The medical team didn’t waste any time indicating a need for a change and Odegaard was sent on for the youngster.

The Norwegian was quick to get involved. His pass to Pepe freed the Ivorian to cut in off the right. He let fly with a shot that Ndidi blocked with his arm and after a VAR review, a spot-kick was awarded. Lacazette stepped up and sent Schmeichel the wrong way. Quite the turnaround. (2-1)

Having replaced Thomas with Albrighton, Rodgers, who’d evidently told his players to press higher, was forced into a second change inside five minutes of the restart. Barnes seemed to jolt his knee and he was stretchered off leading to the introduction of Cengiz Under.

The game had barely settled when we launched a stunning counter-attack to extend our lead. From a Tierney throw-in deep in our half, we worked the ball to Lacazette in the middle of the field. With a helping hand from Xhaka he held off Evans and suddenly the Swiss was free to spread play to Pepe on the right. His charge to the box ended with a pass to Odegaard who showed quick feed to thread in Willian and somehow the ball was squeezed back to Pepe who tapped home on the line. (3-1)

With a two-goal advantage and 30 minutes remaining it was all about game management. Could we keep the home side at arm’s length when they were naturally going to throw more at us? David Luiz bailed out Odegaard with a block after the Norwegian had played a suicidal pass. Elneny stopped Iheanacho and Mari went one-to-one with Vardy and somehow did enough to put off the striker without fouling him as they chased a loose ball.

Partey’s introduction for Elneny brought a new dimension to the midfield but we weren’t exactly adventurous. The aim was to keep the ball and slow things down. Aside from an Albrighton shot that Vardy accidentally blocked, we kept the Foxes away from dangerous areas.

Pepe continued to tease the tiring Foxes on the break. Cedric should have done better with a lay-off from the Ivorian and a few moments later he held onto the ball too long when a pass to Odegaard was on.

A rasping shot by Tierney, a curler by Aubameyang, on as a sub for Lacazette, and a couple of Partey fighters from distance were further examples of our dominance. After an injury peppered game, we had to see out seven minutes of stoppage time. Iheanacho had a fine chance to reduce the deficit right at the end but he blazed over after a corner dropped to him at the back post.

All in all, a very good performance from the Gunners who claimed an important three points to round off a good week. We go again in week against Burnley.