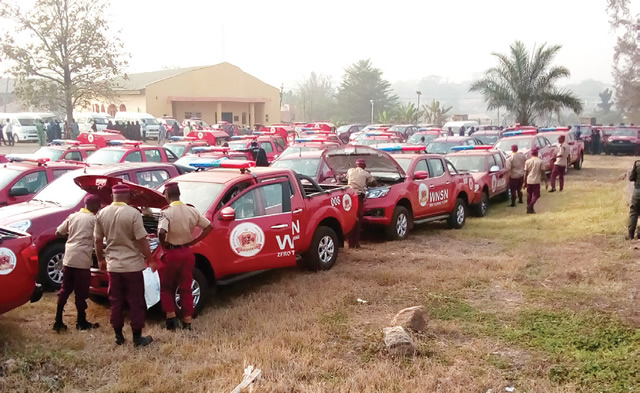 We need your support to produce excellent journalism at all times.

Ondo State Governor Rotimi Akeredolu said this in a statement on Sunday.

Videos from the incident were posted on social media, and reports in some of them said about 20 people died in the attack.

They were said to have stormed the community in large numbers and attacked everything in sight.

A popular fuel station and the palace of the town’s monarch were among the facilities said to have been burnt down by the invaders.

Reacting, Akeredolu said: “we have directed the Commanders of the South West Security Network, Amotekun, to convoke a joint security meeting of all Commanders in the South-West with a view to commencing joint operations in the region immediately.”

He described the attack as “premeditated…horrendous, callous and highly provocative.”

Akeredolu said governors in the region had resolved to defend their people, property, and legitimate means of livelihood against internal and external aggression. On this, there would be no compromise, he stated.

He, however, called on people of the region to remain vigilant and report any suspicious movement in their communities.

He also urged them to be united in the task of defending themselves and their property.

In the statement titled ‘Iigangan provocative onslaught one too many,’ the governor said: “We must reiterate the fact that certain elements are bent on causing friction among the peoples of this country with the sole aim of achieving a pernicious end. They will stop at nothing until their set goal is realized. It is, therefore, incumbent on all lovers of peace and freedom to rise against this current regression into savagery.”

A South-West self-determination activitist Sunday Adeyemo, popularly known as Sunday Igboho, stormed Igangan in January this year and threatened to evict the Fulanis who allegedly declared war on their hosts.

Shortly after the attacks at Igangan, Yoruba and Hausa traders attacked one another in February, leading to several deaths and monumental destruction of goods, stalls and homes.

Oyo State is among states in the country terrorised by killer herders, who are mainly Fulanis.

In the contry’s North-Central, Benue State has been a killing field for the herders in recent time, since Governor Samuel Ortom signed a bill prohibiting open grazing into law.

Governors of 17 southern states in the country jointly banned open grazing in May at a meeting in Delta State.

A notorious Fulani leader in Oyo Iskilu Wakili has been remanded in prison following his arrest earlier this year.

Wakili is accused of kidnapping and other crimes.

The ICIR had earlier investigated how residents of the agrarian community and other neighbouring communities lived under fear of attack by the Fulani herdsmen.

Meanwhile, in a swift reaction, the Oyo State Governor Seyi Makinde urged residents of Igangan to remain calm, adding that security operatives were now in control of the situation.