GrandOldTeam
Share on FacebookShare Share on TwitterTweet
A first half brace from Richarlison and second half markers from Alex Iwobi, Bernard and Moise Kean saw the Blues cruise into the next round and save the blushes of Jordan Pickford in conceding twice. Just a week has passed since Everton overcame Salford 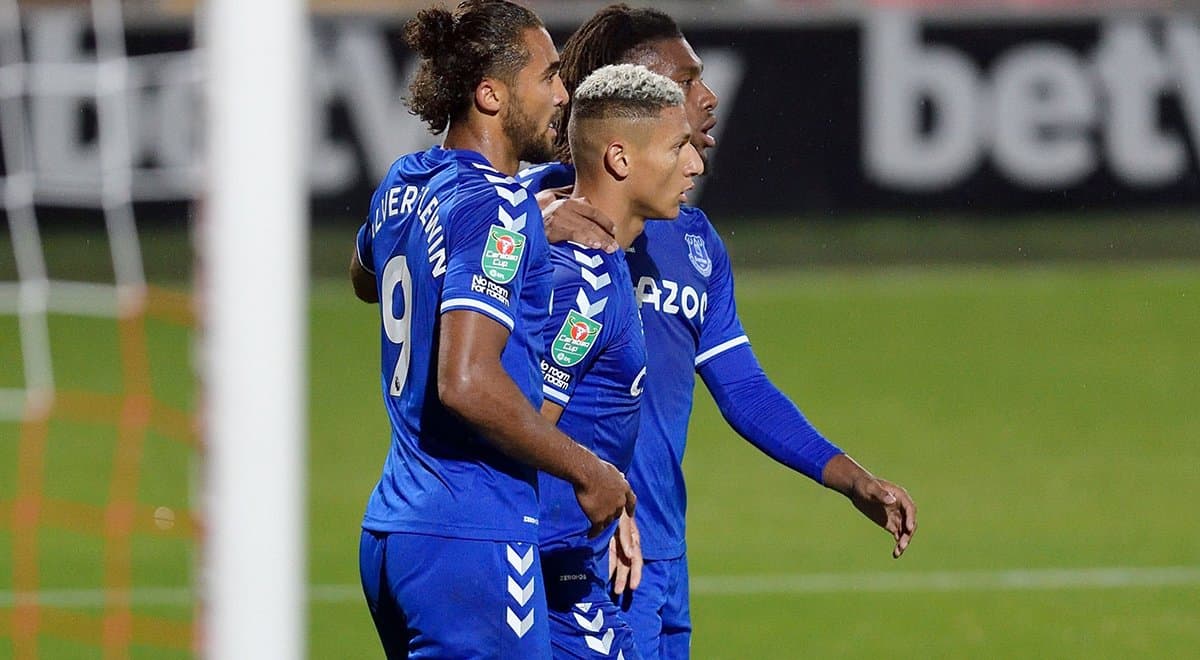 A first half brace from Richarlison and second half markers from Alex Iwobi, Bernard and Moise Kean saw the Blues cruise into the next round and save the blushes of Jordan Pickford in conceding twice.

Just a week has passed since Everton overcame Salford City and earned the right to take on Joey Barton and his Fleetwood side for a place in the fifth round of the Carabao Cup, and a home tie against David Moyes’ West Ham United.

Blues fan Barton is in his third season as manager of the Trawlermen, or Cod Army as they’re more commonly nicknamed, and he relished the opportunity for his club to go up against one of the storied clubs in English football after successfully reaching this round after victories over Wigan Athletic and Port Vale.

Speaking on Tuesday he commented, “The league for us will always be the priority, but to give a great account of ourselves live on TV against one of the best coaches in the world, and an Everton side that are on the up, then it will be an exciting occasion. Even if Everton rotate, you are playing against household names, international footballers, and Premier League players, I see it as a challenge and look forward to the occasion. We have absolutely nothing to lose and everything to gain. When we cross the white line, we’ve got to do our town and club proud. We’ll have a couple of plans to try and disrupt them, but we want to beat Everton. We aren’t here to just take part; we’ll know that we have to be excellent.”

Often an outspoken character, Joey Barton couldn’t contain the excitement he was feeling against coaching against the club he supported and their multi-decorated manager. “If you can beat a League Two side and get a Premier League side in the next round, you are going to be excited about it. When you are an Evertonian, like I am, and you see Carlo Ancelotti, who is an elite-level coach, it’s great. As a coach, it’s the first time I’ve coached against him and, for a young coach, it’s an incredible opportunity. For our players, it’s a great opportunity to benchmark themselves against in terms of their football careers.”

With three wins from three outings, Everton made the short journey to the Fylde coast in good heart but, with Mason Holgate and Jarrad Branthwaite both out injured and Lewis Gibson confirmed on a season-long loan to Reading, manager Carlo Ancelotti was expected to field both Michael Keane and Yerry Mina in the centre of the defence.

Questions that would be answered by the submission of the official team sheet were whether the Godfather would rest both Seamus Coleman and Lucas Digne, as he did against Salford in the previous round, in favour of run-outs for Jonjoe Kenny and Niels Nkounkou who made a very impressive debut in that game.

And the young Frenchman, signed from Marseilles in the summer was happy to comment of why he made the move to Merseyside, “We all know it can be difficult for young players to break through into senior teams but, as we have seen, Carlo has seen fit to put a lot of faith in me and other younger players. I was conscious of the opportunities Everton have given to other young players if they worked hard and showed they could help the First Team. It is going to be a good moment for me to take my chance and really launch my career with Everton. As I see things, here in the Premier League, the managers seem to have more confidence about selecting younger players, so it was right and easy for me to come here. At the beginning I had some apprehension about moving away from my family, my friends and others I am close to, but I told myself that if you don’t take that step when young, you will have those difficulties to come later in life. With some focus and hard work those difficulties can be overcome and I decided to make the change and leave. I am very happy today about the choice I made.”

Carlo Ancelotti sprang a minor surprise when he named his starting eleven, with six changes to the side that started against West Brom, naming the same back four that ended the game against Salford together with a strong midfield and potent attack: Pickford, Kenny, Keane, Digne, Nkounkou, Delph, Sigurdsson (c), Iwobi, Bernard, Richarlison and Calvert-Lewin.

Our referee at a wet Highbury Stadium was Jeremy Simpson.

Everton with almost all the possession in the opening five minutes passing the ball around confidently and looking to stretch the Fleetwood midfield and defence, the first real chance coming from an excellent cross from the left by Nkounkou that DCL couldn’t quite reach. It was Fleetwood though who won the first corner, Delph with a challenge on Morris conceding the set piece chance that saw Keane win the clearing header easily.

Another good cross from Nkounkou found DCL only for his close range header to be blocked and cleared, the next cross arriving from Kenny on the right but, easily claimed by Cairns in the home goal. Richarlison twisted and turned to get away from Burns, but his cross to the back post was too strong and Fleetwood worked the ball clear.

Everton won a free kick 25 yards out when DCL was impeded, a low shot from Digne hitting the wall with the direct effort. The pressure from the Blues was almost constant and on 21 minutes, a shot from Iwobi took a slight deflection to hit the crossbar and go behind for a corner that Fleetwood hammered to safety downfield to Pickford.

The England ‘keeper started the move that led to the opening goal, finding DCL to lay the ball off to Iwobi to find Bernard to float a delicious cross to the right hand side of the area when Richarlison arrived to plant a firm downward header beyond Cairns and into the opposite corner.

Fabian Delph, anchoring the midfield, was booked in the 26th minute for a push in the back of Morris as he looked to drive at the heart of the Blues defence. More good work from Nkounkou and Iwobi worked an opening for Richarlison that he wasn’t able to convert, and as the Blues kept the pressure on again, it was Iwobi with a shot that flashed across the face of goal and narrowly wide.

On 32 minutes, with the rain having eased, Bernard latched onto a mistake by Whelan to gain the edge of the box before jinking inside onto his left for a shot that went agonisingly wide.

Everton scored an excellent second on 34 minutes as Delph sprayed the ball wide to Richarlison and as Bernard drew a defender away, he cut in from the left to roll the ball into Iwobi who played a sweet backheel pass back to the Brazilian to poke home his second of the game.

Nkounkou again got down the left flank to win another corner as the Blues looked to kill the game off before the interval. Delph sprayed another ball out to Richarlison who played Nkounkou in again for a cross that flew across the face of goal and out on the far side. Kenny looking to overlap to get onto a ball from Iwobi was impeded to give the Blues a free kick wide on the right that Stubbs cleared at the second attempt.

With just one added minute signalled, Michael Keane lofted a ball forward for DCL to chest down and volley, Fleetwood keeper Cairns denying him with an instinctive save to his left. And at the break, Carlo Ancelotti would surely have been delighted at the application and attitude his side had exhibited in a totally one-sided first half.

Half time changes by both managers saw Mark Duffy on for Fleetwood replacing Sam Stubbs and Anthony Gordon on for the Blues replacing Dominic Calvert-Lewin.

And just three minutes in, an error by Pickford saw Duffy reduce the arrears latching onto a blocked clearance to finish easily. Everton responded to the shock goal inside a sixty seconds, Anthony Gordon taking a ball from Nkounkou to beat the fullback, get to the bye-line and pull a cross back for Iwobi to score confidently.

Fleetwood were working hard in the early stages to try and get a toehold in the game, responding no doubt to encouragement in the dressing room from Joey Barton. But it was nearly a fourth goal from the Blues as Richarlison again got free to feed Iwobi, his instant shot going just wide of the target.

Incredibly though it was Fleetwood who again hit back just before the hour mark, Pickford deciding against coming for a cross that saw the ball headed back into the danger area by Evans where Camps tallied with a bicycle kick effort that went straight at Pickford and he could only palm it into his own net.

As the rain returned with a vengeance, Morris was next to test the Everton keeper with a stinging shot from the edge of the area that Pickford was happy to beat away diving to his left. Everton sent Tom Davies on for Fabian Delph in the 62nd minute and he was straight into the action with a stiff challenge on Evans.

The midway point of the second half saw the Blues raid down the left with Gordon and Bernard, the latter firing in a shot that Cairns parried and it was put behind for an Everton corner that was easily cleared. Nkounkou got forward again to win a corner on the left again, the head of Evans getting the ball clear. Everton needed a fourth and it duly came in the 73rd minute as Gordon got clear on the right to take a ball from Iwobi and his cross fell perfectly for Bernard to lash home from just inside the edge of the area.

Fleetwood made a double change on 74 minutes, Matete replacing Coutts and Evans coming off to be replaced by Saunders. Carlo Ancelotti used the stoppage to withdraw Richarlison and send on Moise Kean for the final quarter of an hour.

The pace of Gordon on either flank was proving a threat to the home side in the latter stages however, credit to Fleetwood, they were not lying down and kept trying to get forward. Into the final five minutes and Morris tried his luck from distance again only to pull his shot well wide of the target. Good pressing by Kenny saw him win possession deep in Fleetwood territory and pick out Gordon with a good cross, Gordon firing a first time volley wide of the target.

Four additional minutes were indicated and Everton went nap in the final minute, the impressive Nkounkou again getting from on the left to backheel a ball into the path of Moise Kean to crash home the fifth goal.