Deadline
Share on FacebookShare Share on TwitterTweet
UPDATED with company statement. Twitter has started to come back online for many users just prior to tonight’s presidential town halls. “Twitter has been down for many of you and we’re … 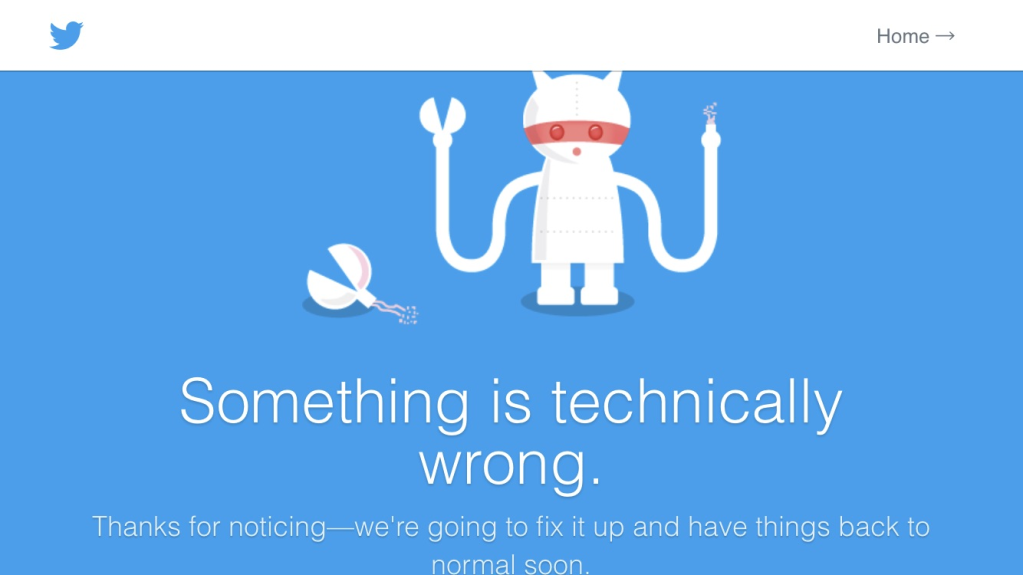 UPDATED with company statement. Twitter has started to come back online for many users just prior to tonight’s presidential town halls.

“Twitter has been down for many of you and we’re working to get it back up and running for everyone,” the company said in a tweet two hours into the outage. “We had some trouble with our internal systems and don’t have any evidence of a security breach or hack.”

Just as Twitter traffic was getting set to surge on a night of dueling presidential town hall events, the social media platform abruptly stopped working for many users.

“Something is technically wrong,” a message on the company’s corporate website said, acknowledging the glitch. “Thanks for noticing — we’re going to fix it up and have things back to normal soon.”

Users could see some of the usual features when the went on the platform, but the main feed displayed the message “Sorry, something went wrong” instead of displaying tweets.

Reps from Twitter did not immediately respond to a Deadline request for an update.

The website Down Detector said the problem started shortly after 5PM ET and mostly hit the network’s website. The outage, whose cause was initially unknown, was also affecting the Twitter iPhone and Android apps. Geographically, the northeast U.S. appeared to be the hardest-hit region, but California and other places have been knocked offline, as has Japan, according to Down Detector.

Twitter has been a familiar refuge for President Donald Trump throughout his presidency, but especially lately, as he heads toward Election Day with a deficit in most polls. His overall level of tweets to his 87 million followers has reached a crescendo in the final weeks of the campaign. Earlier in the day, he been railing against many of his usual targets — NBC, debate officials and Democrats — just before the outage hit.

Executives at the social media company have enacted measures in 2020 to flag or even take down tweets that attempt to spread information deemed to be inaccurate, attacking an individual or inciting violence. Several tweets by the president have fit this definition and been sanctioned, prompting howls of protest from many supporters, and earlier today Twitter locked the official account of the Trump campaign. The social media platform, along with Facebook and others, have sought to slow or block the spread of a questionable New York Post article alleging misdeeds by Joseph Biden’s son, Hunter. In an interview with Fox Business Channel, Trump said he wasn’t sure why the account was locked, but the scrutiny from Silicon Valley was “going to all end up in a big lawsuit.”

NBC has resisted a fierce backlash from and has persisted in its plan to feature Trump in a town hall event, opposite one on ABC featuring Democratic nominee Joe Biden, forcing viewers to pick one to tune in. A groundswell of criticism of NBC has grown through the past couple of days, with Twitter hashtags and celebrity-driven appeals to the network to change course.

The split plan developed in the absence of a regularly scheduled debate, which was scuttled when Trump declined to take part in a virtual event. Organizers had recommended a virtual approach due to Trump being infected with COVID-19. He refused, and his doctors have said he has since tested negative for the virus.

Twitter has been down for many of you and we’re working to get it back up and running for everyone.

We had some trouble with our internal systems and don’t have any evidence of a security breach or hack.