Breaking down Suriname's squad: How might they challenge CanMNT?

Canadian Premier League
Share on FacebookShare Share on TwitterTweet
The Suriname national football team is 136th in the FIFA World Rankings. Before 2021, they hadn't qualified for the Gold Cup in 35 years. The country itself, a former Dutch colony, is the smallest independent nation in South America -- even though they 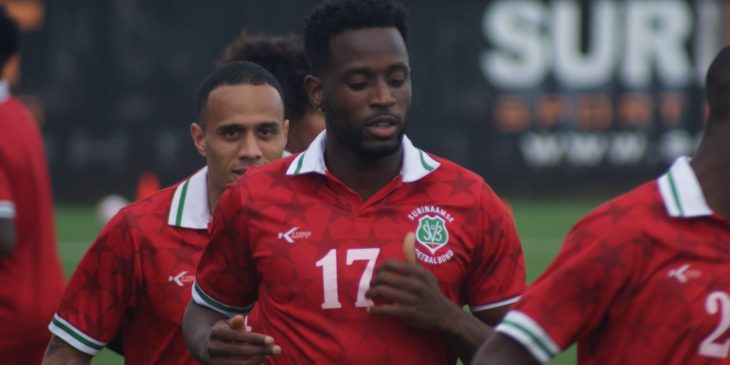 The Suriname national football team is 136th in the FIFA World Rankings. Before 2021, they hadn’t qualified for the Gold Cup in 35 years.

The country itself, a former Dutch colony, is the smallest independent nation in South America — even though they compete in Concacaf internationally — by both territory and population. Why, then, has Canada’s upcoming World Cup qualifying match against them been touted as a pivotal, make-or-break test?

That’s how Canada coach John Herdman sees it, at least.

“If you’d asked me 11 months ago, we had a good [qualification group]… Bermuda was the toughest team in the group,” he told media last weekend. “Suriname are a completely different team now. They’re a top six to top eight team in Concacaf in terms of the quality of play. I don’t think anyone would have predicted that in nine months they’d have 15 new players who have played at the highest levels in the Eredivisie.

Indeed, Suriname’s heavy recruitment strategy over the past two years — coupled with a new law from 2019 that has allowed athletes with multiple nationalities to represent Suriname without surrendering other citizenship (colloquially called a “sports passport”) — has seen the country’s footballing potential skyrocket. An abundance of players in the Netherlands, especially, can claim Surinamese ancestry, but most of them have opted to represent the perennially-strong Dutch national team and retain their birth country’s citizenship (even if they’d be unlikely to earn more than a handful of senior caps). Under the new system, Suriname still won’t be getting the Virgil van Dijks of the world, but their overall squad strength has improved remarkably.

With that understood, let’s take a closer look at coach Dean Gorré’s squad, and how they might stack up to Canada.

Hahn, who recently signed for Belgian giants Anderlecht after six straight years in the Eredivisie with a handful of clubs (most recently Heerenveen), is sure to be the starter against Canada. Hahn started both of Suriname’s two qualifiers in March (his only two caps), being substituted out late in the game against the Cayman Islands for Ishan Kort to make his debut.

Kort, a 21-year-old still yet to make his professional debut for Almere, looks to be the main backup for this team, ahead of 29-year-old Claidel Kohinor, the only player in the current squad who plays his club football in Suriname.

Suriname has an incredible wealth of experience at the back — perhaps more so than Canada. This group has racked up a combined 756 appearances in the Dutch top flight, which doesn’t even account for the 16 games Ryan Donk has played in both the English Premier League (with West Bromwich Albion) and Spain’s La Liga (with Real Betis).

Donk has more experience at a higher level than any of the central defenders Canada (and most other Concacaf nations) has available at the moment, and as such the 35-year-old will be a point of focus for Herdman’s team. Although he’s only placed twice for Suriname, he will likely captain the side and anchor the backline — unless they opt to play with a back three and push Donk into a holding midfield role. Any of Leeuwin, Malone, or Pinas could slot in beside him, the former two being veterans of the Eredivisie and the latter being a 23-year-old who’s already played 75 times in the Dutch top flight. Both Donk and Pinas scored in their debuts for Suriname in March against the Cayman Islands.

Unlike some of his teammates, the 27-year-old Ridgeciano Haps is at the absolute height of his powers in the Netherlands right now, having been a key piece of Feyenoord’s run to qualify for the Europa Conference League this year. He’s a talented attacking fullback joining the Suriname squad for the first time, and he’s sure to be a handful for whoever plays on the right side for Canada.

The 24-year-old Damil Dankerlui will probably draw the unwelcome assignment of marking Alphonso Davies. The Ajax academy product had a very good 2020-21 season with Groningen after moving from fellow Eredivisie side Willem II, and he’ll be an important player to watch both in attack and defence. That said, he’s missed 10 games in the past two years because of red card suspensions, plus another for yellow accumulation; in a game in the Concacaf region, Canada will need to be wary of his physicality.

Kelvin Leerdam will probably be the most familiar name on this list to Canadian soccer fans; the Inter Miami midfielder/fullback played three seasons for the Seattle Sounders, where he won two MLS Cups (both of them over Toronto FC). Although he plays as a right-back at the club level, his two assignments for Suriname so far have been further up the pitch in midfield. Still, it may indeed be him tasked with the Davies assignment — the pair battled directly against each other a handful of times during Davies’ time with the Vancouver Whitecaps.

Alberg, like Leerdam, started both of Suriname’s games last window. The 30-year-old has played in six different countries at some very good levels, most recently opting to go out on loan to Hyderabad in the Indian Super League.

Everyone in the midfield group is at least 30 years old, but every single one has played a wealth of games in the Dutch top division. Suriname has managed to bring in some impressive reinforcements for this camp, with first-time call-ups Ryan Koolwijk and Mitchell Donald earning FIFA approval to join the squad. Koolwijk has played an incredible amount of time in the Netherlands (227 games in the Eredivisie alone), and he could be the one tasked with pulling strings centrally.

Donald, meanwhile, has branched out a little bit since breaking into the Dutch league with Ajax. He captained Red Star Belgrade in 2017-18, leading them (and Canada goalkeeper Milan Borjan) to a second Serbian league title in his three years at the club. He’s since gone on to be an important piece of the middle for Turkish sides Yeni Malatyaspor and BB Erzurumspor, although he missed the latter half of the 2021 season and hasn’t played a game since January 21.

Biseswar and Chery, 33 and 32 respectively, are the more attacking pieces of this midfield group. Chery scored 14 goals in 38 games for Maccabi Haifa this year, including two in Europa League qualifying, and Biseswar has 86 career assists at the professional level.

Although Suriname’s greatest strength is probably in its experienced backline, there are some players up front that can do serious damage.

Compared to most of his teammates, Gleofilo Vlijter has been around for ages; the 21-year-old forward made his senior international debut in 2015, just 15 years old. He’s scored 11 times in his nine appearances for Suriname, one of those goals coming in March against the Cayman Islands. Right now, he plays his club football for Beitar Jerusalem, after stints in Georgia and Cyprus.

Nigel Hasselbaink will be one to watch as well; the veteran forward scored a hat trick against Aruba in March, and he has a lot of club experience, both in the Eredivisie with Excelsior and in the Scottish Premiership with St. Johnstone, St. Mirren, and Hamilton Academical. The 30-year-old was excellent from the wing against Aruba, and he could be a key focus of the attack.

Suriname does have two new faces in the attack for these games, though, both of whom could be threats. Both Sheraldo Becker and Mitchell te Vrede enter as highly-touted recruits, both under the age of 30 and boasting extremely strong resumes.

Te Vrede, 29, currently plays in Saudi Arabia for Al-Fateh, but he has 123 Eredivisie games, most of them for Feyenoord. He was with the club from 2012 to 2015, and he represented them in both the Europa and Champions Leagues in continental play.

Becker is perhaps even more dangerous; the 26-year-old winger is a current direct competitor to Alphonso Davies for Union Berlin in the Bundesliga. He played 18 league matches for the club this season, scoring three and assisting three, although he missed several months due to ankle surgery. Becker was previously a key part of the attack for PEC Zwolle and ADO Den Haag in the Netherlands after leaving the academy of Ajax in 2015, and he represented the Dutch national team at youth levels right up to the U-20 division.

Dimitrie Apai warrants a mention as well, simply for being the most-capped member of this squad. The winger has 23 international matches played for Suriname, and he has plied his trade at W Connection in the Trinidadian league since 2014.

All in all, the Surinamese attacking group may not have quite the potency of Canada’s, but it’s certainly packed with players who could cause trouble for Les Rouges with their experience.