Punch Newspapers
Share on FacebookShare Share on TwitterTweet
It was a night of pride for Nigerians at the 2022 Black Entertainment Television Awards ceremony which was held on Sunday night at the Microsoft Theater in Los Angeles. 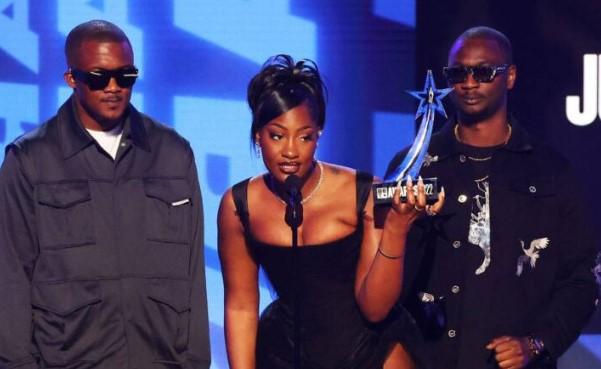 It was a night of pride for Nigerians at the 2022 Black Entertainment Television Awards ceremony which was held on Sunday night at the Microsoft Theater in Los Angeles.

In an exciting turn, Nigerian artistes stole the spotlight at the BET Awards ceremony, which celebrates Black excellence in music, culture and sports.

From historic awards to electrifying performances, Nigerian artistes made the country proud at the event, which is considered one the biggest recognition in Black entertainment globally.

The talented singer beat Nigeria’s Fireboy, Dave from the UK, Dinos from France, Fally Ipupa from Congo, Little Simz from the UK, Ludmilla from Brazil, Major League Djz from South Africa, and Tayc from France, to win the award

Receiving the award, Tems urged women and girls to continue on their chosen path, adding that the hard work will soon pay off.

Other Nigerian artistes who have won the award in the past include 2Baba, D’banj, Ice Prince, Wizkid, Davido and Burna Boy.

Beiber joined Wizkid and Tems in “Essence” remix in August 2021.

Singer Fireboy thrilled the fans with his electrifying performance at the awards ceremony in Los Angeles on Sunday night.

He sang on the same stage globally renowned artistes like Diddy, Lil Wayne, Roddy Rich, and a host of others, leaving the attendees cheering at his outstanding performance.

Following Fireboy’s performance of “Playboy” and “Peru” at the show, fans have taken to Twitter to celebrate the YBNL-signed artist.

Nigerian producer and singer, Pheelz, stole the show at the BET awards pre-show outdoor event, which preceded the main ceremony on Sunday night.

Pheelz sang his hit song, Finesse, to the cheering crowd at the pre-show.

Announcing his historic performance on Twitter, Pheelz said, “About to be the first international artist to perform at the BET pre-show. Yeah, I’m super gassed.”

Nigerian celebrities and fans have taken to various social media platforms to congratulate Tems, Wizkid, Fireboy, and Pheelz for their outstanding wins and performances, hailing them for taking “Afrobeats to the world.”