Bavarian Football Works
Share on FacebookShare Share on TwitterTweet
Bayern Munich, in front of a notable amount of Die Roten supporters, secured their first title of the 2020/21 season. 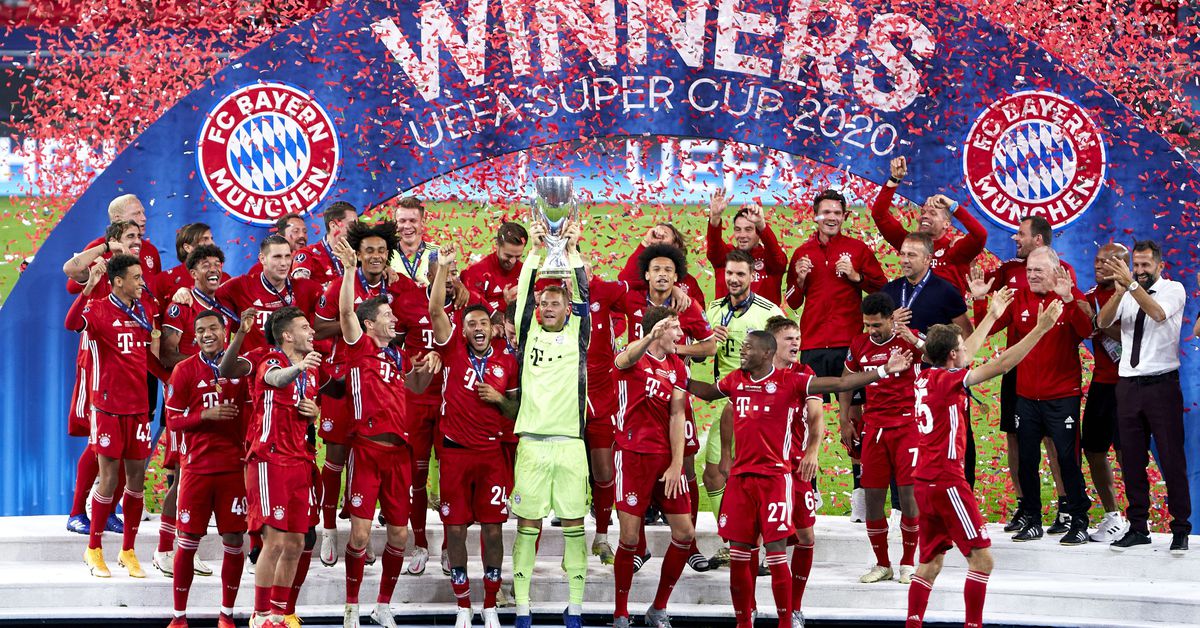 Bayern Munich continued to clinch titles at the Puskás Arena after a fantastic football match against Sevilla FC. In a thrilling game that lasted 120 minutes, Javi Martinez secured Bayern’s first title of the 2020/21 season after a clinical header. It was a fairy-tale ending for the Spaniard, who most likely played his last minutes as a Die Roten player.

Here are BFW’s awards from the thriller in Budapest!

I know, it is unorthodox to pick a manager for these awards. But I was very impressed by this Sevilla side and surprised by how well Lopetegui managed his team. Sevilla was one of the first sides in a very long time that successfully limited Hansi Flick’s Bayern in terms of clear-cut chances. Yes, Bayern was the better side and deservedly won the game, but Julen Lopetegui’s tactical astuteness nearly out-smarted Hansi Flick. Sevilla started off bravely, pressing Bayern whenever it was logical while also keeping their defensive shape. During the second half, Sevilla tried to kill the game’s tempo, defended deeply with great numbers, and was a one-on-one chance away from winning the game after a beautifully worked counter-attack.

Bayern hasn’t lost a game this year, but today they came very close in doing so. I think Lopetegui deserves massive credit for taking on the best team in the world and nearly beating them.

The evolution of Robert Lewandowski is incredibly fascinating. At Borussia Dortmund, Lewandowski developed into Jurgen Klopp’s ideal striker: someone who can find the space behind the defenders and hold up the ball on the opponent’s part of the pitch.

His role was different for Pep Guardiola. The Spanish coach didn’t need him for quick transition attacking plays. Rather, Lewandowski became the complete forward in the opponent’s penalty area for a side that dominated possession.

His new role under Niko Kovac and Hansi Flick has been therefore been quite fascinating. Lewy often drops back to the middle of the park, often starting attacks rather than completing them. The Lewandowski we have seen this year is arguably the best version that has ever been. While today was not a day when everything went his way, it was another game that made me appreciate the impressive evolution he has made as a player.

Thomas Muller was dangerous throughout the whole game and was at times the only Bayern player that took risks in a side that lacked the final edge throughout large parts of the game. He is a creative force in Bayern’s midfield and a player that could have easily kept on running for another 120 minutes.

I believe Flick is beginning to start Lucas Hernandez, not because Alphonso Davies has been poor, but that the Marseille-native needs a couple of games in the starting XI to rebuild his confidence. That being said, Bayern’s most expensive transfer is more solid defensively than the break-out star from Canada. Hernandez is good on the ball, quick, and also has extremely good defensive awareness.

Sevilla was defensively and pragmatically brilliant today. They would have won the game if it wasn’t for Manuel Neuer saving Youssef En-Nesyri’s one-on-one finish in the 86th minute. The Gelsenkirchen-native has made a remarkable turnaround in his performance after the long-term injury and the drop of form that followed. It wouldn’t be an exaggeration if one said that a 34-year-old Neuer is the best Neuer we’ve ever seen.