Arsenal 2-1 West Ham: By The Visuals

Arseblog News
Share on FacebookShare Share on TwitterTweet
Arsenal continued their winning start to the 2020/21 Premier League season with a less-than-convincing 2-1 win against West Ham. Mikel Arteta’s introduction proved pivotal as the England under-21 star scored a late winner after good work from Bukayo Sak

Arsenal continued their winning start to the 2020/21 Premier League season with a less-than-convincing 2-1 win against West Ham. Mikel Arteta’s introduction proved pivotal as the England under-21 star scored a late winner after good work from Bukayo Saka and Dani Ceballos in an otherwise lackluster performance from the Gunners against what was a well-organised and solid West Ham side.

Let’s dive into the data to see if we can find some positives and perhaps areas to improve. 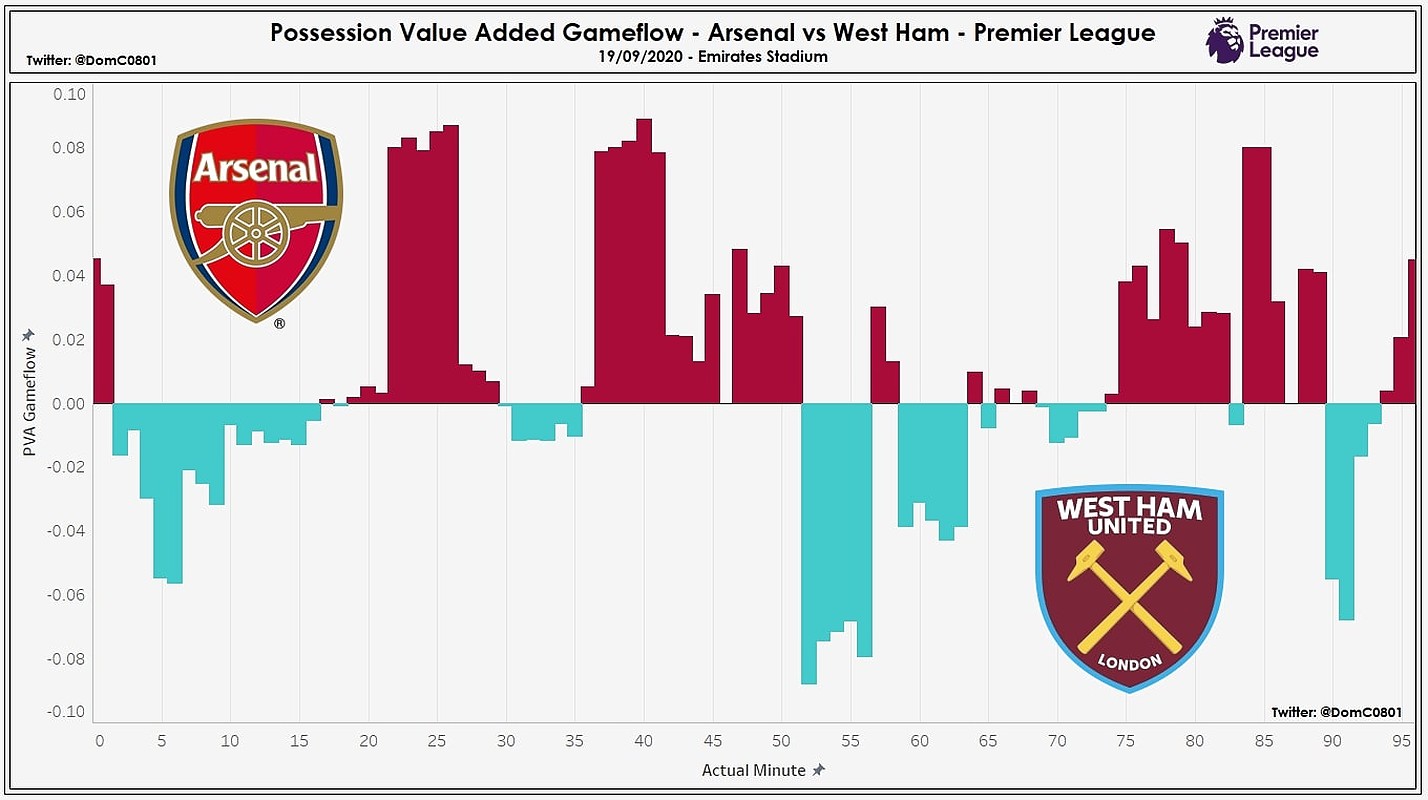 Above is the Possession Value Added Difference between the two teams, on a 5-minute rolling average, from Saturday’s game.  Possession Value Added or PVA measures the increase or decrease in the likelihood of a possession ending in a goal based on the successful passes a team makes. It is essentially a measure of how threatening you are when you have the ball.

From the above we can see that Arsenal generally controlled the game, with West Ham having a few periods of increased threat, notably the first 20 minutes where they grew in confidence. Arsenal’s goal (minutes 25 and 86 above) came during periods of PVA dominance but equally Michail Antonio’s equaliser (45th minute) also came in a period of Arsenal PVA dominance showing, perhaps, a vulnerability to this Arsenal side even when dominating. 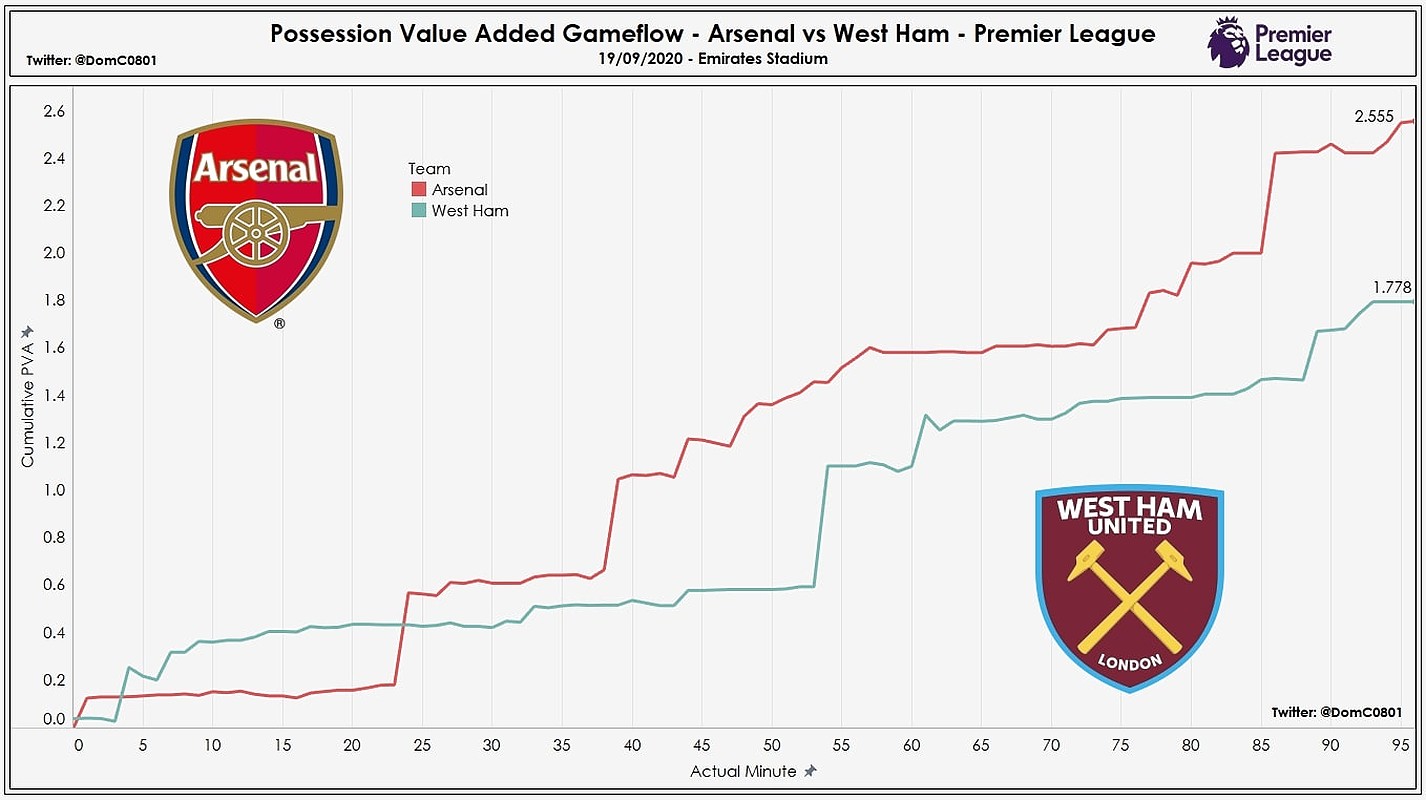 The above shows cumulative Possession Value Added for both teams during the game. This further demonstrates Arsenal’s slow start which continued until the move that led to Lacazette’s goal. Despite the early struggles, Mikel Arteta will surely take positives from the way Arsenal finished the game, with Nketiah’s goal coming during a period of extended threat. This chart further shows the benefit of using non-shot metrics to judge a game as Scott does in his ‘By the Numbers’ series .

Both his non-shot xG model and my PVA model recognise that despite the lack of high xG shots, Arsenal largely dominated the game, but they still allowed West Ham to create a large amount of high xG chances despite this dominance which is of course worrying. 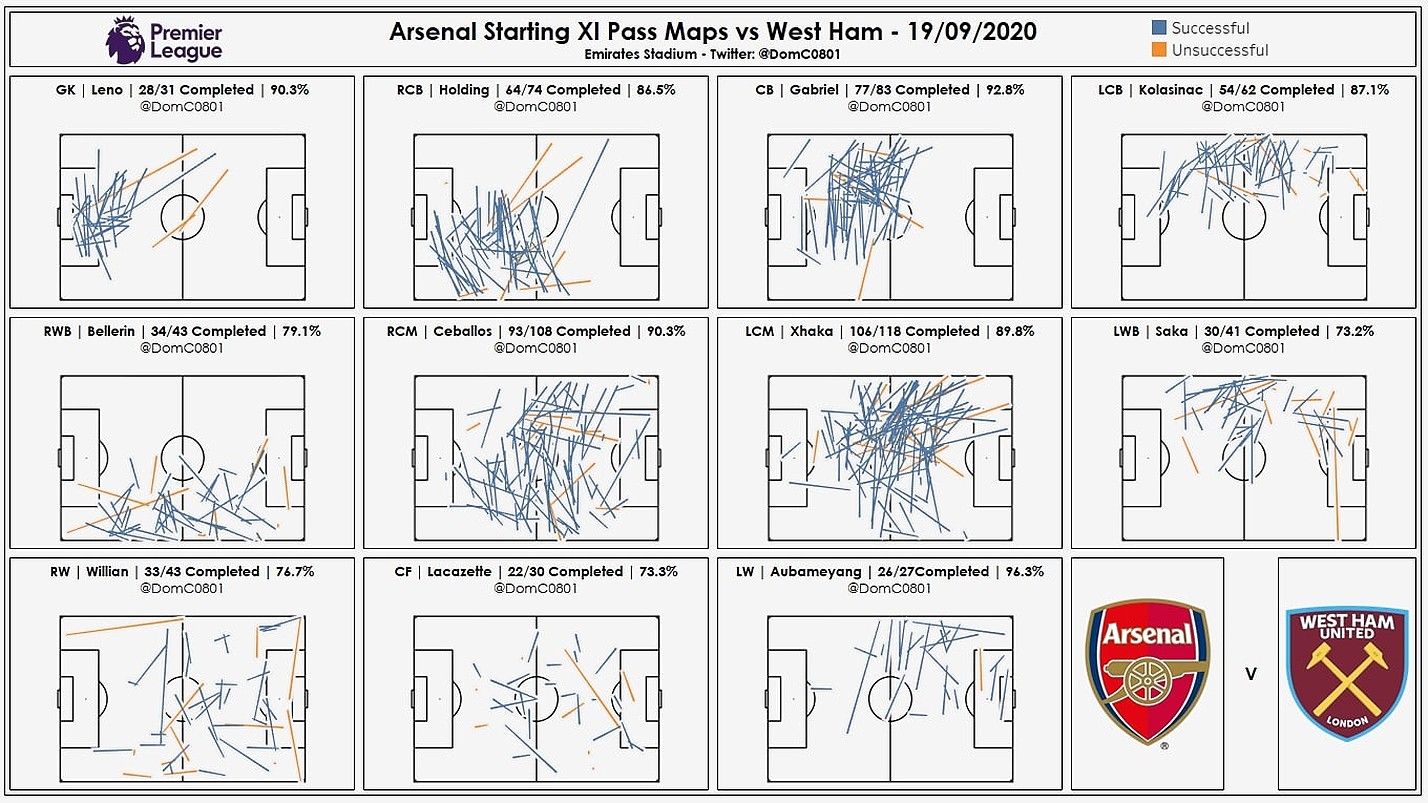 Above is a Pass Map for each of the Starting XI, showing the successful and unsuccessful passes for each player. Although our passing down the flanks is promising and relatively effective in producing chances, our lack of a presence in the ‘Number 10’ area of the pitch is worrying and may be a reason for our rumoured interest in Lyon’s Houssem Aouar. 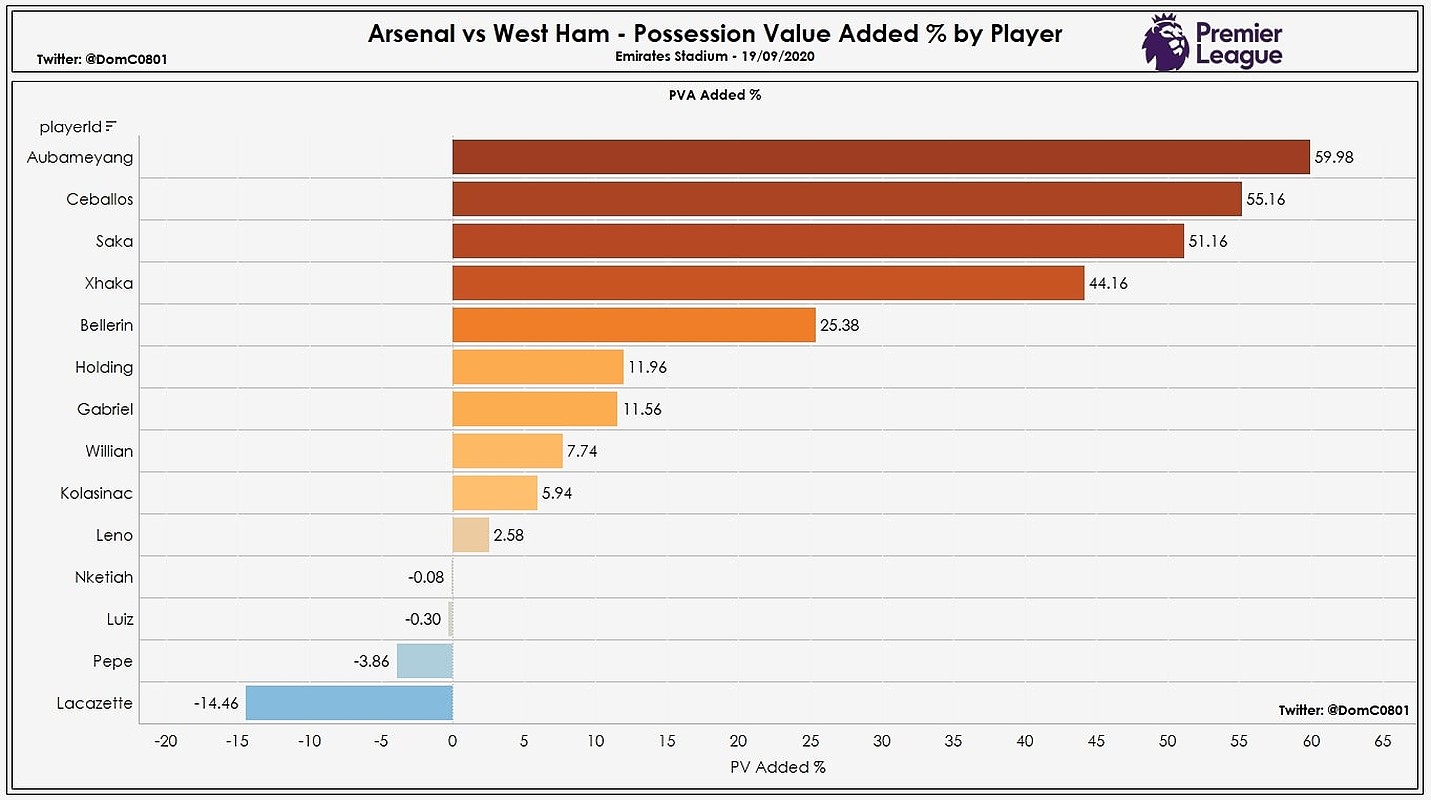 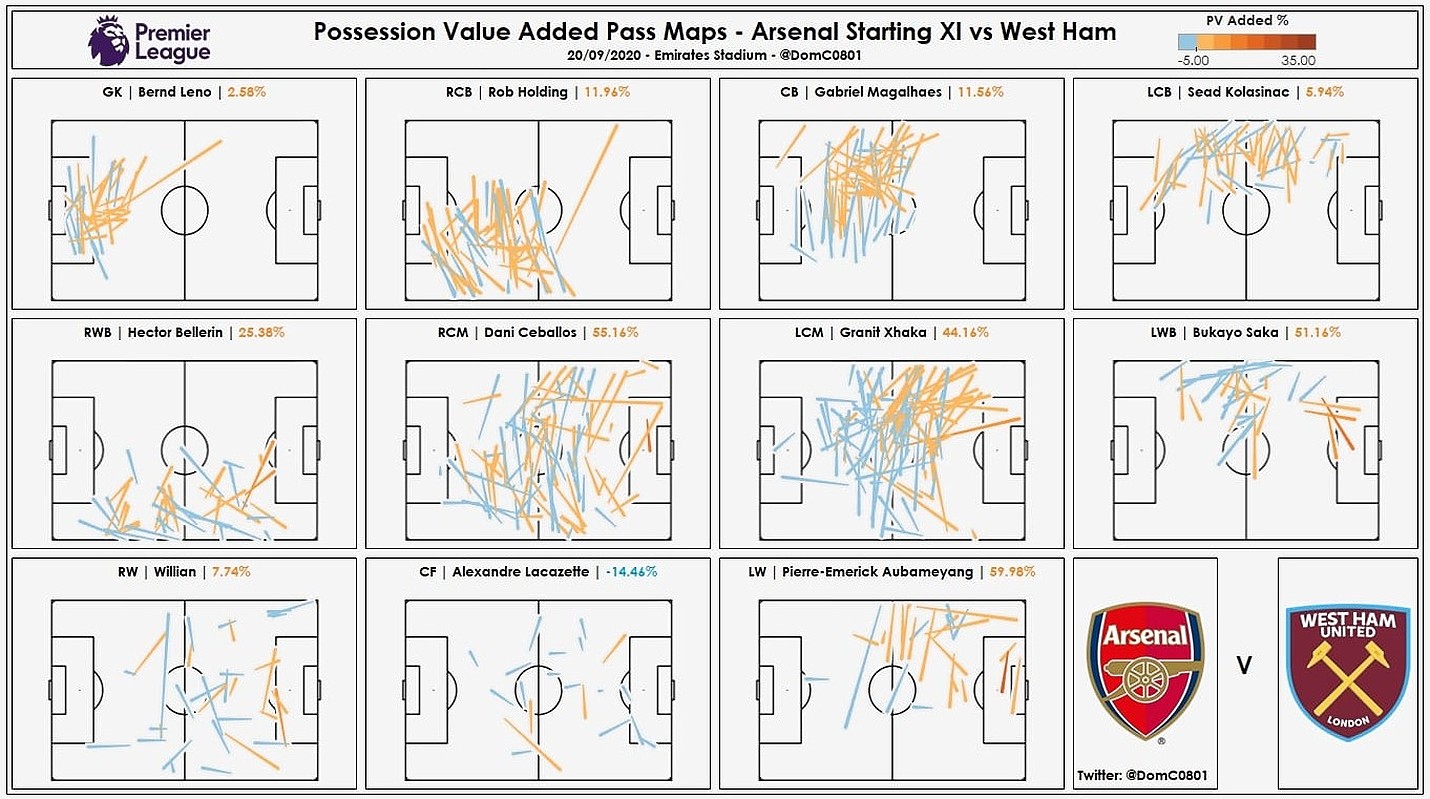 To coincide with the Pass Map, above is a Pass Map showing the Possession Value Added for each successful pass by each player and each players Possession Value Added from their successful passes. What the PVA values highlight to me is our left-sided bias during Saturday’s game, with 2 of our top 3 PVA passers being our Left Wing-Back Bukayo Saka and our Left Winger Pierre-Emerick Aubameyang. 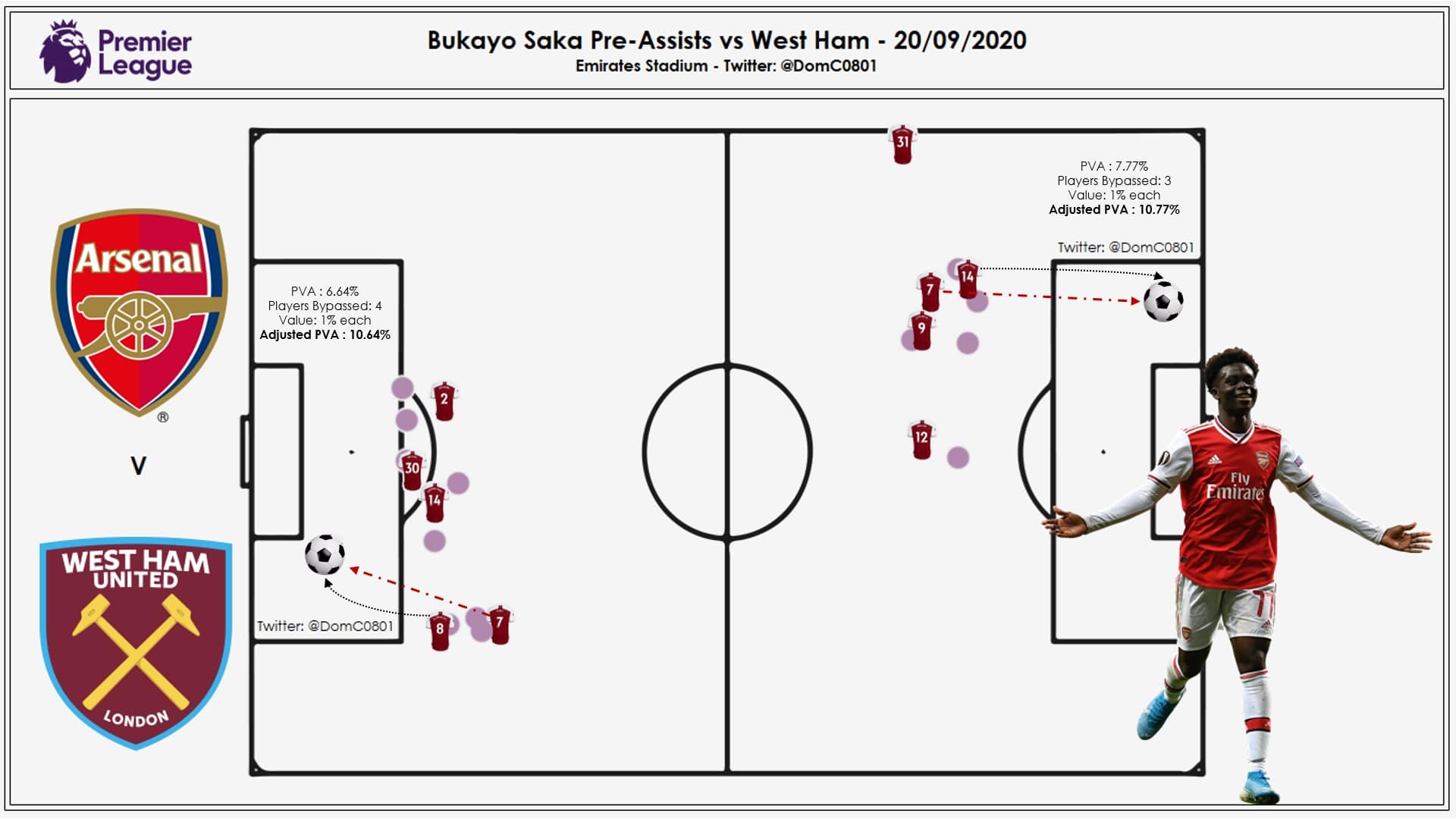 On the topic of Bukayo Saka, the Hale End graduate was pivotal in both goals providing the ‘Pre-Assist’ for both goals as shown above, with his through-balls bypassing a combined 7 West Ham defenders. On a night with a dearth of promising performers, the Ealing native continues to show his potential.

Let’s look at some of our other key performers, starting with Gabriel Magalhães. 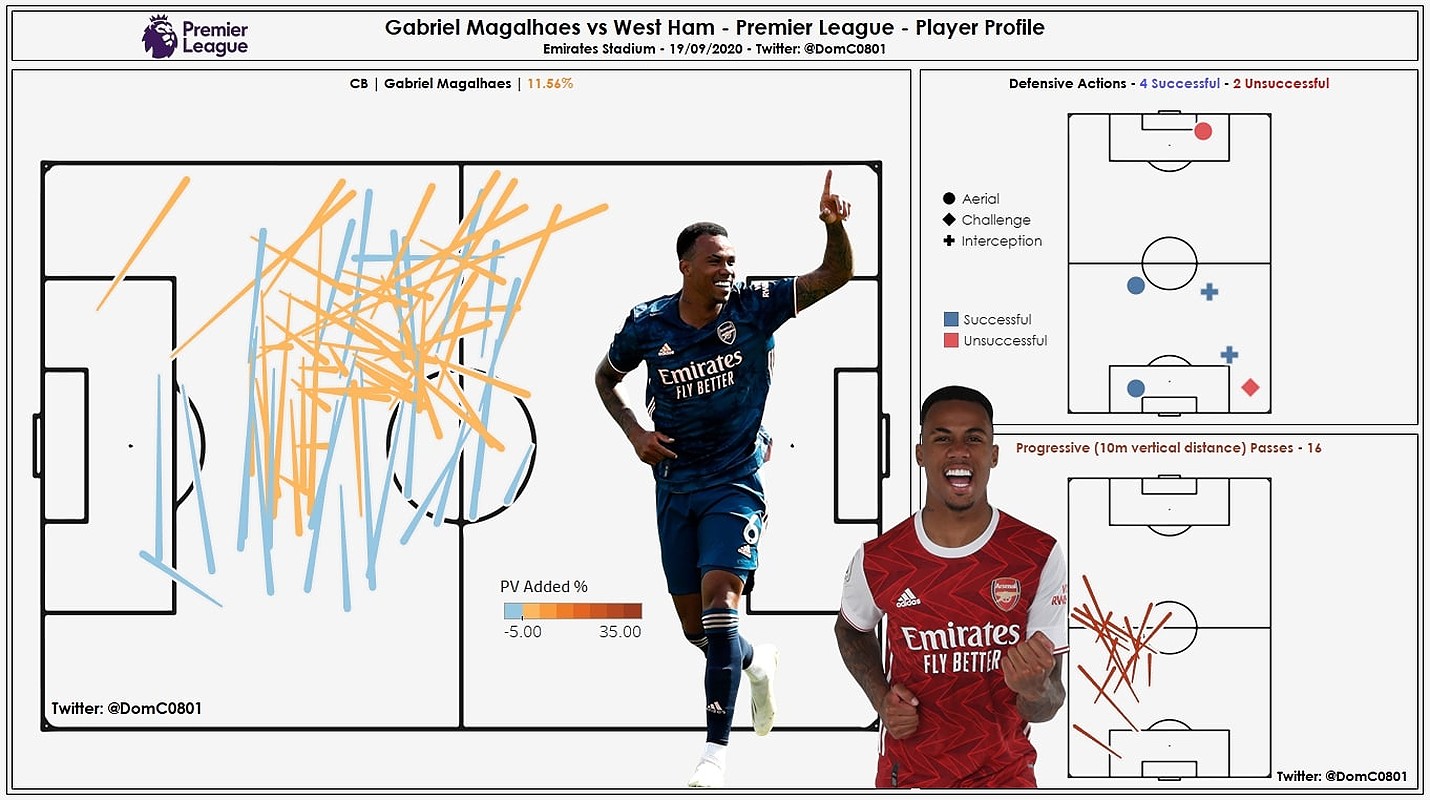 Another player who impressed yet again was Gabriel Magalhães. The new signing from Lille put in another solid performance against tough opposition in Michail Antonio. Gabriel’s passing was much improved, with the Brazilian adding 11.56% in Possession Value through his passing, with 16 of his 77 pass completions progressing the ball at least 10 metres vertically.

Now let’s look at another of our star performers, Dani Ceballos. 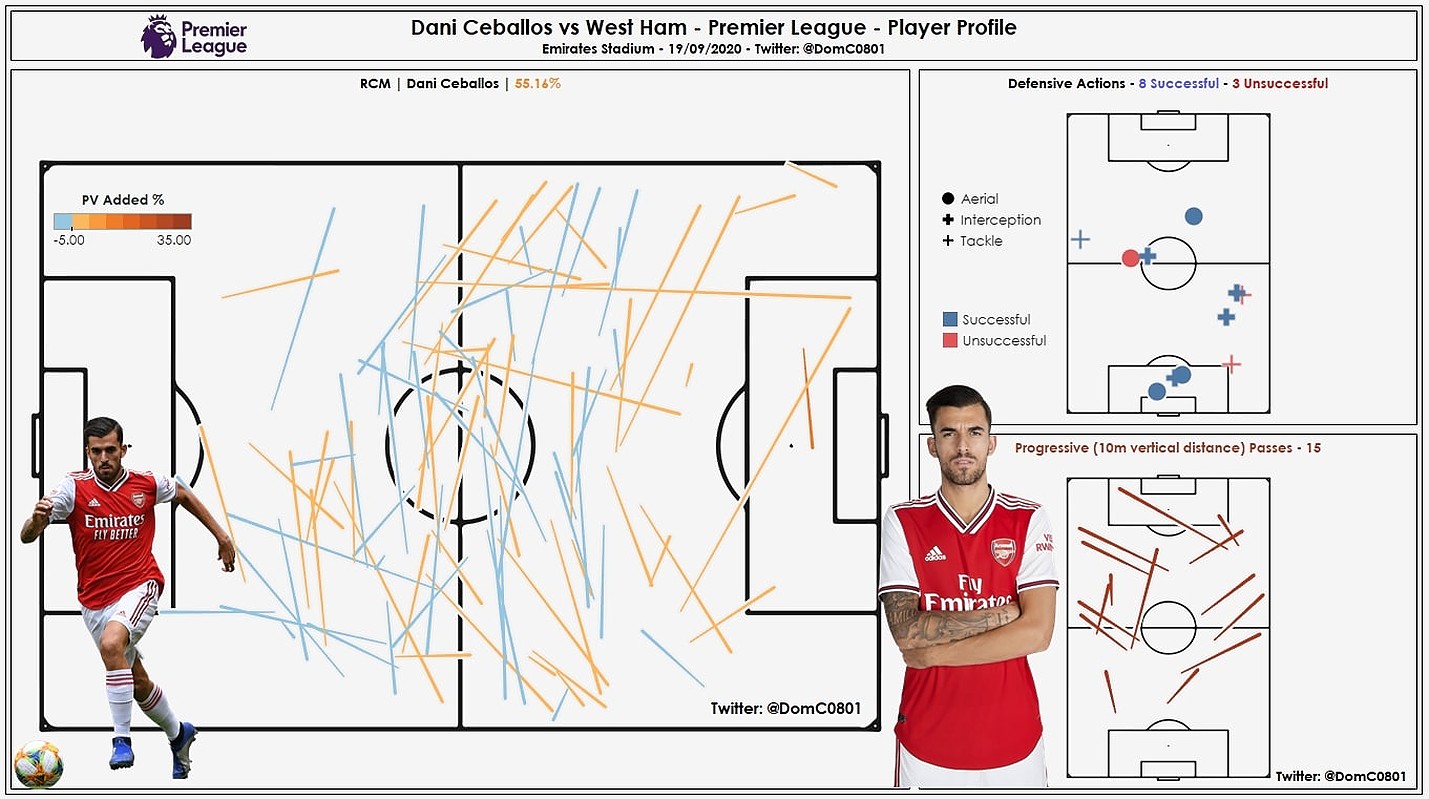 Ceballos played a key role in Saturday’s game, providing the assist for Eddie Nketiah’s winner as well as a key interception inside his own penalty area to prevent a potential West Ham goal. Ceballos produced 15 progressive passes from 93 completions with 3 passes into the West Ham penalty area. Ceballos’ all action performance proved pivotal as the Spaniard stepped up on a day we needed him to.

Now onto a less positive performance. 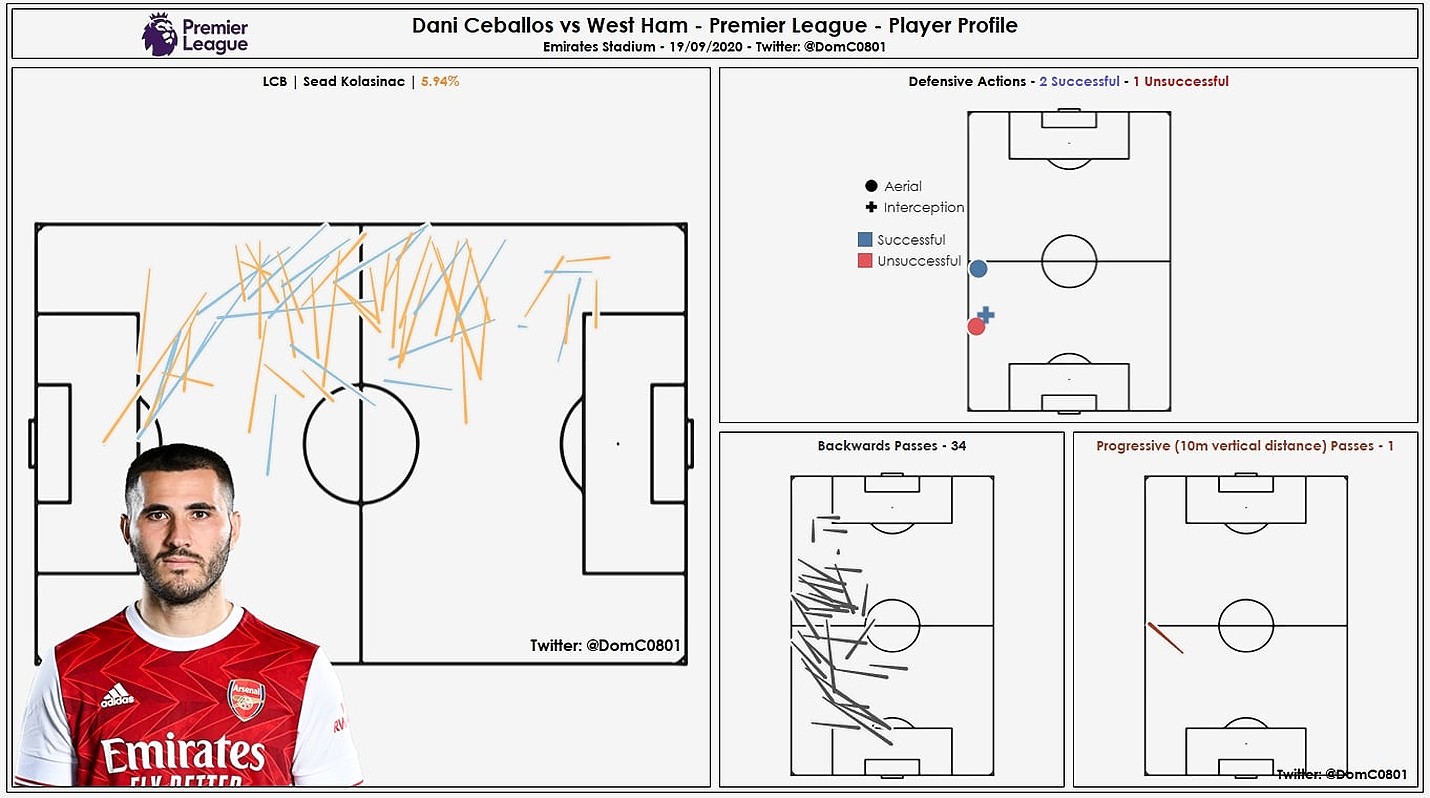 I deliberated over whether or not to include this section as I do not enjoy criticising players openly, but I feel like Sead Kolasinac’s performance on Saturday needs highlighting. The Bosnian international managed to complete only 1 progressive pass, with 34 of his 54 completions going backwards.

If we compare this to Kieran Tierney last week, then the Bosnian’s % of passes that go forward is 37% compared to 51% of Tierney’s against Fulham. To further this 19 of Kolasinac’s backwards passes came from inside the West Ham half and whether this is due to inability or a lack of confidence it is clearly negatively affected Arsenal’s ability to attack incisively.

All in all, saturday’s showed that despite our uptake in form under Arteta, we still lack a certain cutting edge against teams who sit in a deep block against us. Hopefully this problem gets addressed before the transfer window shuts.

It’s onto Liverpool next week for Arsenal, with the Gunners hoping to win a Premier League game at Anfield for the first time since September 2012, with a Carabao Cup game against Leicester on Wednesday sure to see some of the squad players getting some action